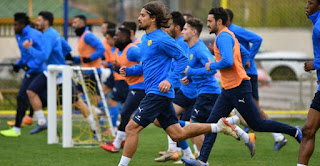 Bodrumspor will be looking for their 2nd Super Lig scalp and to cause another upset in the Turkish Cup this Thursday as they host Ankaragucu in the first leg of the tie. The game will be played in Mugla due to problems with the Bodrumspor pitch after flooding.

Bodrum is more known for its beaches and holiday resorts than it is for football, but the Lig 2 side have big ambitions to play at a higher level and firmly put themselves on the map of Turkish football. A brilliant 2-1 win over Sivasspor in the last round raised a few eyebrows and they now have Ankaragucu in their way of a place in the next round of the Cup.

Two poor results of late see them sit just outside the playoff positions in Lig 2. A 5-2 home defeat against Sakaryaspor, and 3-0 defeat at Amed Spor will be a bit of a concern for their manager Engin Ipekoglu especially conceding 8 goals in 2 games.

The match against Bodrumspor will be another opportunity for Ankaragucu fringe players such as Younes Mokhtar, Ilhan Parlak and Alessio Cerci to impress and stake a claim for a place back in the starting line up. It will be interesting to see how Ismail Kartal lines up in this match with the game against Basaksehir coming up on Monday.

The Turkish Cup is an opportunity for Ankaragucu to win silverware and qualify for Europe, but at the same time we have already seen how bare this Ankaragucu squad is. A few more injuries to key players could play a big part in the teams fight for survival in the Super Lig.

Ankaragucu were lucky to come away from the Rizespor match with a draw, and the absence of the likes of Erdem, Faty, Bifouma and Kenan were a big loss for the team. The good news is that Moulin and Heurtaux are both back fit and in contention for a place in the team again. The Frenchmen have struggled with injury since coming in but now seem to be over the worst and will play a big part in helping the team avoid relegation.

The game will be played at 1pm Turkish Time and is live on A Spor. We look forward to another Ankaragucu victory down in the Turkish coast and one of Jims favorite places!
By Nady - December 04, 2018