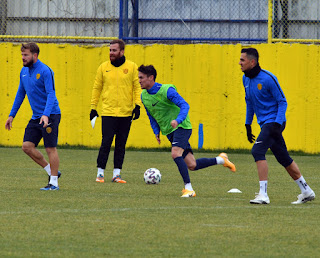 The rescheduled match between Ankaragucu and Hatayspor takes place tomorrow afternoon after the initial game was cancelled due to the Covid outbreak within the Hatay squad. Hatayspor are on a run of good form of late with only 1 loss in their last 5 games and find themselves sitting nicely in 8th place in the Turkish Super Lig.

Ankaragucu registered their first win of the season with a spirited comeback and 4-3 win over Konyaspor at the weekend. They will need more of the same from the attack tomorrow, but will need a big improvement in defence if they are to take anything from this match.

Ricardo Freidrich is a very popular player within the squad and amongst the Ankaragucu support due to his attitude and commitment to the club. His performances this season however havent been anywhere near acceptable and his place is under threat after mistakes for 2 of the goals at the weekend.

In defence, Michal Pazdan has injured his hand and its not clear whether he will be fit for tomorrows match. He will be a big loss if he is ruled out again. The centre back pairing of Sarlija and Atakan were all over the place at the weekend and it is a concern if they are to start again.

On a more positive note, the performances of Saba Lobjanidze, Stelios Kitsiou, Joseph Paintsil and Emre Gural will give Mustafa Dalci confidence that Ankaragucu can take something from this game if they perform at the same level again.

Saba in particular was excellent, scoring his first goal in 9 months, adding an assist and winning a penalty. Hopefully that gives him the confidence to go on a run now and start adding numbers to his game. Kitsiou was back to his best while Paintsil and Emre both made a big difference when they came on.

Emre Aygoren was chosen to come on ahead of Sahverdi and Voca who wasnt even in the squad at the weekend. The 20 year old youth academy product impressed when he came on with his work rate and pressing and might have done enough to play his way into Mustafa Dalci plans. Its always nice to see academy products play in the first team.

Hatayspor are punching above their weight in the Super Lig after winning promotion last season. They were one of the early favorites for relegation but a 3-0 win over Erzerumspor and 3-1 win against Fatih Karagumruk in the last couple of weeks have saw Omer Erdogans side site nicely in the top half of the table.

They have some talented and experience players in their side including Adama Traore from Monaco and former Stoke and Man United Striker Mame Diouf. Its likely they will go with a 4-1-4-1 formation and they will be looking to take all 3 points back to Hatay.

Its difficult to predict the Ankaragucu squad due to the unknown of Michal Pazdan so i have went with the below assuming he is still injured.

GK - Korcan - I do like Freidrich, but its been too many mistakes of late and time for Korcan to come in until the January transfer window where a Goalkeeper should be on the shopping list.

RB - Kitsiou - Back to his best at the weekend and the captain of the team for me.

CB - Atakan - With Pazdan out the only option is Atakan or 18 year old Murat who is yet to make his debut.

CB - Sarlija - The only fit centre back at the club just now.

LB - Pinto - An important player for the club, needs to do better defensively than he did at the weekend. Always a threat going forward.

CM - Lukasik - Played an important part in the first goal at the weekend and needs a run of games to get back to his best.

CM - Assane - Can be a good player but needs to use his brain more and also improve on his fitness. But he does have a good range of passing and is calm on the ball.

RW - Paintsil - Impressed when he came on at the weekend and should start tomorrow, an important player if he can stay fit.

CAM - Emre Gural - Again contributed when he came on and deserves a starting place in the team.

LW - Saba - Hopefully he can build on his performance from the weekend and show some consistency now.

CF - Borven - Will score goals if you create chances for him