Genclerbirligi vs Ankaragucu - The Ankara Derby! 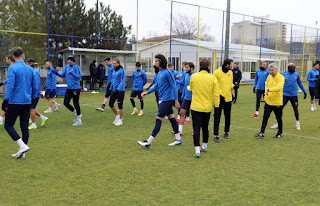 Its Derby weekend in Ankara as Genclerbirligi host Ankaragucu with both teams desperate for the 3 points as they fight against relegation. The Derby might not be the most ferocious in Turkish Football but its an opportunity for both clubs to show who is the best team in the Turkish Capital and more importantly gives the players confidence and much needed morale when you are in a relegation battle.

Only 3 points separate the two sides who have both won their last 2 Super Lig games and looking to make it 3 on the bounce. Gencler however were knocked out of the Turkish Cup during the week with a surprising 2-0 home defeat against Tuzlaspor.

Mustafa Dalci has done the impossible, and won the Ankaragucu support over due to the last victories against Konyaspor and Hatayspor. But it was the manor of those victories that has to be respected. Down 3-2 against Konya, Dalci made late substitutions with both Paintsil and Emre Gural playing their part in turning the match around with Ankaragucu winning 4-3. And then in midweek some of the football the team played at times was very impressive, and again Dalci made changes in the game which were effective, such as bringing Paintsil on who scored again.

Many Ankaragucu fans including myself were surprised that Paintsil never started the match on Tuesday, especially with 9 first team players missing. But Dalci commented in his press conference this week that Paintsil isnt fit enough to start and play 90 minutes yet. Despite coming on as a sub midweek, he was substituted when he scored his goal late on. Paintsil wasn't happy but apologised to Dalci after the match and has been forgiven.

Saba Lobjanidze had another good game midweek and has improved under Dalci who seems to have given the Georgian winger confidence and he is thriving in the team. Both Zvonimir Sarlija and Endri Cekici had their best games for the team midweek while Erdi Dikmen was solid on his return to the team.

Dalci also made another big decision 2 weeks ago when he dismissed Alper Potuk from the squad and stripped him of the captaincy. Since that decision the team has won 2 games out of 2 and their looks to be a togetherness and team spirit that was missing under Fuat Capa. Of course we cant just blame Fuat for this as winning brings confidence and brings players together.

Stelios Kitsiou has been back to his best since his return to the team, and i would be really surprised if someone doesn't come in for him in January. He is the best player on the team in terms of his ability, but also his work rate, attitude and leadership skills are invaluable.

Genclerbirligi are managed by former Ankaragucu manager Mustafa Kaplan, so he knows exactly what is at stake. Gencler surprised everyone a couple of weeks ago with a 2-1 win against Alanyaspor, and then followed that up with a 1-0 win at the weekend against Erzerumspor to take them out of the relegation zone on 11 points.

Erzerum had plenty of chances in that game but poor finishing let Gencler off the hook. Ankaragucu will create opportunities in the game but will need to take them if they are to take 3 points from the game.

Gencler still have some quality and experience players in attack such as Bogdan Stancu, Floyd Ayite and Giovanni Sio, as well as the impressive Berat Ozdemir in midfield. It looks like they will be without former Rangers winger Daniel Candeias who is an excellent hard working player and will be a big miss.

Ankaragucu won their home derby last season 2-1 thanks to an Ilhan Parlak winning goal, while Giovanni Sio scored the only goal in a 1-0 win for Gencler in the return game. It should be another close encounter that could go either way on Sunday afternoon.

Again it will be difficult to pick the team this weekend as we dont know who is fit or who has returned from Covid-19.

GK - Ricardo Freidrich - A good performance midweek against Hatay should see him keep his place in goal. Hopefully this will give Ricardo confidence and we see him deliver more consistent performances.

RB - Stelio Kitsiou - For all the reasons explained above, simply the best player in the team.

CB - Zvonimir Sarlija - His best performance midweek against Hatay, good on the ball and defended well. Important to have some stability at the back and looks like Pazdan will miss out due to injury.

CB - Erdi Dikmen - When he just concentrates on defending he is a very good player. Excellent in the air and he passed the ball well out of defence too.

LB - Thiago Pinto - Similar to Kitsiou, another Key player both in attack and defence. Benefited from Bolingi not being in the team midweek.

CM - Atakan Cankaya - Just needs to be careful he doesnt get too carried away with it being a derby match as you always get 100 percent commitment for Atakan. His passing was much better midweek and needs to build on that part of his game.

CM - Assane Diousse - Missed the last game due to injury but was back in training this week. Has come in for some criticism from some of the Ankaragucu fans. His main issue is fitness and sharpness. You can tell he has the talent and a good range of passing, but runs out of steam too early in the game. Has improved a bit of late and due to shortage of numbers could see him starting on Sunday.

RW - Saba Lobjanidze - Excellent in his last two games and again will be looking to continue his run of form. His decision making has been better of late and he was unlucky not to get on the scoresheet against Hatayspor.

LW - Endri Cekici - Looked much better in a wide position instead of the Number 10 role. Technically a very good player who can score goals from distance and his set pieces are a big advantage to Ankaragucu.

CAM - Ender Aygoren - One of the Academy products who has impressed when he has played the last couple of games. I would push him further forward as he has the skill and touch to be more effective slightly higher up the pitch. The final position in the team will come down to Assane and Atilla. I don't think Atilla played well enough midweek to earn his place in the team.

CF - Emre Gural - Looks like Borven will miss out again due to injury and Bolingi is suspended. Paintsil is also said not to be ready to start the game so leaves Emre Gural as the main option. Emre is better just off the striker but he again worked hard during the week, held the ball up well and played his part in the teams victory.