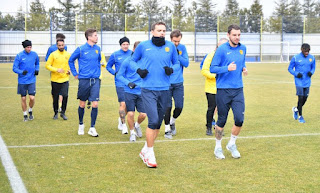 We have been saying it for a month now, but Monday nights match with Rizespor is another must win match for Ankaragucu if they are to have any chance of staying in the Turkish Super Lig. Spirits are high after a hard fought point against Kayserispor last weekend despite playing 70 minutes of the match with 10 men due to the Michal Pazdan sending off.

Its another match against a relegation candidate on Monday as Ankaragucu host Rizespor knowing only a win will be acceptable as the team need to start picking up 3 points. Hikmet Karaman marked his return as manager and you can already see the togetherness of the squad, and his influence in the training ground. Some of his tactical decisions were the reason Ankaragucu took a point from last weekends match.

Michal Pazdan will miss out due to suspension after his ridiculous challenge that let his team mates down. It could signal the end of his Ankaragucu career unless he proves in training that he deserves a second chance. Atakan Cankaya picked up an injury and will also miss out.

Ante Kulusic marked his return to the team for the first time in 5 months with an excellent performance at the back. He will likely come into the starting line up with Erdi Dikmen due to the suspension of Sarlija. Pinto should also return which is a boost for the team.

Borven was given the nod up front and will likely start again as Hikmet kept faith with the Norwegian for 90 minutes last week. It will be important for Ankaragucu to create chances for Borven and Endri Cikici replacing Emre Gural could be an option.

Daniel Lukasik has shown how important he is to the team in midfield and will hopefully come back into the starting line up alongside Voca. They will be vital to protecting the defence while getting the ball forward quickly to the attacking players.

Rizespor have only won 1 of their last 11 games in the Super Lig and lost 2-0 at home against Erzurumspor last weekend. They won 5-3 the last time the two sides met after a controversial sending off of Alper Potuk.

Thankfully for Ankaragucu the man who played a huge part in that victory Loic Remy misses out due to injury. Former Ankaragucu players Gokhan Akkan and Konrad Mikhalak will both likely start with the former in particular a key player for the club.

Brian Samudio is a player i have always liked for Rizespor and will be one of the main dangermen in attack. This is however a game Ankaragucu should be winning and have more than enough quality to take the 3 points.

GK - Korcan  - Man of the match last weekend with multiple important saves. He will keep the number 1 jersey for the time being.

RB - Kitsiou - Looked rusty in the first half last week, but he was outstanding in the 2nd half and will be regaining that match fitness at an important time.

CB - Kulusic - Will make his first start after an impressive return to the team last week. His experience could be invaluable for the remainder of the season.

CB - Erdi - Will likely start due to suspensions of Pazdan and Sarlija while Atakan is out injured. Needs to keep things simple and concentrate for 90 minutes. Hopefully Kulusic next to him will be a help.

LB - Pinto - Should return to the lineup after missing last weeks game.

CM - Voca - Played ok last week but still feel he has more to offer, hopefully with a run of games we will see the best of him.

CM - Lukasik - One of the first names on the team sheet when fit.

RW - Paintsil - Played well last week, want to see more from him in attack this week as a lot of his work was done defensively due to the team playing with 10 men.

LW - Saba - For me he has 1 more game otherwise he will be dropped to the bench. He has had 1 good month the whole season back in December and is now back to poor passing, poor finishing and just running up and down the pitch.

CAM - Endri - Surprised last week when Emre took his place in the team. He was poor and Endri should come back in and take his place.

CF - Borven - Worked hard last week without any service in attack. Hopefully this week we can be on the front foot and create chances for him.