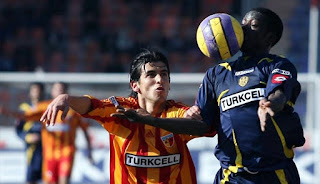 Its been a positive week for Ankaragucu after the appointment of Hikmet Karaman who returns for his 4th spell at the club. His arrival has been met with the approval of Ankaragucu fans who see him as the perfect candidate to take Ankaragucu to safety and avoid the drop.

Like most Turkish Coaches, if you look at Hikmet Karamans CV you will notice that this is his 22nd position as Manager since his first club Zeytinburnuspor in 1998. A remarkable amount of clubs for any manager but this is the Norm in Turkey.

You have to look beyond that to see, the experienced coach who speaks Turkish, English and German which will be a big factor in his move to Ankaragucu with so many foreign players in the squad. Instead of using an interpreter, he can communicate with the players himself.

He also has a wealth of experience in guiding teams to safety having done so many times in the past with the likes of Erzurumspor, Ankaraspor, Kayserispor and previously with Ankaragucu. Hikmet is also known for his man management skills which is invaluable especially with teams struggling with confidence.

His greatest achievement in the game is taking a struggling Kocaelispor from the relegation zone to safety and winning the Turkish Cup in 2001. It meant Kocaeli qualified for the UEFA Cup where they met Arsene Wenger and his Arsenal side and produced one of the biggest results in Turkish Football history as they won 4-1.

Even at the age of 60 Hikmet Karaman is still learning and trying to better himself in the game. You just have to look at his Instagram and Linkedin accounts and you will see the amount of self learning and training he puts himself through.

Saturday is arguably the one of the biggest games in many years for Ankaragucu as they take on fellow relegation strugglers Kayserispor. A defeat in this match would almost certainly see Ankaragucu play in Lig 1 next season which would be financially damaging for the club.

Its a clean slate for every player in the Ankaragucu squad to play his part and prove that they deserve a place in the starting line up. The likes of Torgeir Borven and Sahverdi Cetin both have the opportunity now to fight for their place in the team. Both have the talent but have been mostly starved of opportunities by Fuat Capa and Mustafa Dalci.

Early team news is that Joseph Paintsil and Endri Cekici both return from suspension, while Stelios Kitsiou and Michal Pazdan are both back and available too. It looks like the game will come to early for Daniel Lukasik.

Dan Petrescu and his Kayserispor side have been on good form since the start of January and have only lost 1 of their last 5 games. They have beaten Malatyaspor, Denizlispor, Basaksehir and Kasimpasa since the new year too.

The good news for Ankaragucu is that Denis Alibec one of their Key players is out for the rest of the season with injury. Kayserispor have signed Kevin Luckasen in the January window who comes in as his replacement, while Aaron Lennon the former England International will be looking to help his team to safety. Former Ankaragucu player Ilhan Parlak will also be in the squad and hoping to get one over his former team.

Hikmet Karaman will no doubt be spending the next few days watching over footage of the previous Ankaragucu games. Their needs to be a settled back 4 from now until the end of the season otherwise Ankaragucu are going to concede silly goals every  week.

Building a foundation at the back and having all his midfielders and attacking players available should at least give Hikmet food for thought. Every single Ankaragucu fan will be behind him and the team and hoping he can guide us to safety.

Goalkeeper - Ricardo Freidrich - Was rightly dropped and hopefully the spell on the bench will have done him good and he can get back to the form he showed last season.

Right Back  - Stelios Kitsiou - If Ankaragucu are to stay up its imperative that they get Kitsiou back to full fitness. Big player for the club.

Centre Back - Zvonimir Sarlija - My one criticism of Sarlija is he dives too much. He needs to concetrate on being a defender and show how good a player he actually is.

Centre Back - Michal Pazdan - Again he needs games to get his fitness back, but a steady partnership with Sarlija can be key to Ankaragucu staying up.

Left Back - Thiago Pinto - I think Thiago will also benefit from a settled defence and playing in the same position every week.

CM - Idris Voca - He is the one player in midfield who can pass both short and long. With a run of games under the right manager he can be an important player.

CM - Atakan Cankaya - With Lukasik out Atakan can been the ball winner in the middle of the park but needs to show discipline and improve on his passing game. His work rate is invaluable to the team.

RW - Joseph Paintsil - Comes back into the team after his suspension. Needs to stop letting his team down and concentrate on scoring goals and creating chances which he has proved he is good at.

CAM - Endri Cekici - Great to have Endri back after his suspension. Not his ideal position but he is the only player possibly along with Alper who can play in this position. Alper has so fair failed to impress.

LW - Saba Lobjanidze - After a great month in December, Saba has been back to his old self of poor crossing and finishing. Another key player who needs to find that consistency again and start finding the net.

CF - Torgeir Borven - Create chances for him and he will score goals. Hopefully Hikmet Karaman can be the one to bring out the best of him.