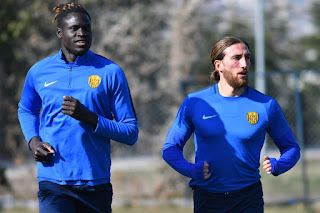 The last few games we have been must win games for Ankaragucu against fellow relegation candidates Erzurumspor, Kayserispor and Rizespor. Unfortunately Ankaragucu took only 2 points from those games and leave themselves a mountain to climb with the run of fixtures coming up.

First up is a tough away match against high flying Hatayspor who have been a breath of fresh air since their promotion to the Super Lig. The good news for Ankaragucu is Star player Aaron Boupendza is suspended for Hatay after picking up a yellow card in their last match. Boupendza has been arguably the best player in the Super Lig this season since his remarkable 100k move to the club in the summer.

Boupendza is just one example of the excellent scouting work that has went on at Hatay with the likes of Adama Traore, Rayanne Abaid, David Akinola, Mame Biram Diouf and Moahmmed Kamara all impressing.

Mohammed Kamara was picked up on a free transfer from Menemen in the Turkish 2nd tier while Boupendza a 100k signing from the 2nd tier in Portugal. While Ankaragucu continue to sign failure after failure and build a team with loan signings, Hatay have got it right and Boupendza is in talks this week over an 8 Million Euros move to Krasnodar in Russia.

Hikmet Karaman took control of his 2nd Ankaragucu match last weekend and will be disappointed they never took all 3 points against a poor Rizespor side. Team selection with Atilla and Saba both starting was a big mistake and those two should not find themselves in the starting line up this week if Ankaragucu have any hope of taking anything from the game.

A change of formation may be the right move for Karaman with 4-4-1-1 an option. Endri can come into that left midfield position and Saba can take his place on the bench. Sarlija will return from suspension while Badji is also available for selection after he picked up a knock.

The last time the two sides met Ankaragucu won 2-0 at home and will be hoping or a similar performance this time round. They are 5 points from safety and its looking more unlikely as the weeks go by that the team can get out of this relegation fight.

The key factor for Ankaragucu in this match will be keeping it tight at the back and taking any chances that come their way. Hatay are a very good attacking side and its important Ankaragucu keep their shape and dont give away any silly chances.

Korcan -GK- Has cemented his place as Number 1 under Hikmet Karaman and will need to be at his best as he will likely be busy this weekend.

Kitsiou - RB - Hopefully with the last 2 full games under his belt he is getting back to full fitness whcih will come at a crucial time for the club.

Sarlija - CB - Will return to the starting line up after suspension and a welcome addition.

Kulusic - CB - Played in the last 2 games and will likely get the nod ahead of Erdi.

Pinto - LB -Need him to be fit, a key player when he is in the team but too often injured this season.

Lukaskik - CM - Again one of the first names on the timesheet and his experience will be vital tomorrow.

Voca - CM - Slowly getting better with the run of games in the team. His passing forward can be vital for the attacking players when playing on the counter attack.

Endri - LM - Should come back into the team ahead of Saba. Important if he is given the opportunity that he keeps the ball and creates for the attacking players. Also vital at set pieces.

Geraldo - RM - Has shown in his short spells when coming on that he is good with the ball and can also put a good cross into the box for the likes of Borven and Badji.

Paintsil - FW - Paintsil works had and i would like to see him in a more central position just off the main striker who he can support, but also fall back into midfield when we are defending.

Borven - Striker - Played the last two games and scored an important goal at the weekend. Best finisher in the team and should keep his place in the team.