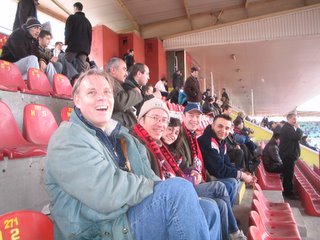 "Ah, the police are coming out with their little stools," said Hande minutes before the Genclerbirligi versus Ankaragucu match kicked off. Stool jokes... no only Istanbul Steve would go there.

But I'm getting ahead of myself. Viking Kanka Jens (he who nowadays says he is from Switzerland rather than Denmark) and myself showed up at Chopin for the first of many beers. Marash Kanka Hakan was next in toe and then came a couple of first timers. Istanbul Steve is no stranger to Turkish football having covered the game for various groups ranging from the BBC to Reuters (sorry if that's not a great range Steve but it's the best I can do when I'm drunk), and Steve's partner Hande, who has covered football more than most but marked today, the Ankara derby, as the first time she actually went to a match.

Pre-match drinks wise, Hande and Steve had obviously had a difficult night on Saturday, they were drinking cola, while we of course were on the Efes. But it was a beautiful day in Ankara, well above 15c and it was lovely to sit outside at the Chopin.

Once again, I'm getting ahead of myself.

Now please, If you are slightly patriotic, or just bloody stupid, don't read the next paragraph.

Steve had his lighter and small change taken away from him when he went through the police cordon. Well, that's to be expected. Hande got touched up by the female police officer when she went through. That too. But what the bloody hell was happening when Jens and I went through? I saw the cops hassling out Jens, it was something to do with his Blackberry-type computer and then the ***** with a badge and told me I had to hand in the batteries in my digital camera. My immediate thought was "oh dear, oh dear".

Luckily, I didn't say what I was really thinking.

I then showed him my press card and told him I was going to write about the Ankara derby for the ............ (the bunch of people who employ me when I'm not writing this rubbish).

It was at this point that the wonderful improvisation, not to mention threat assessment of the Turkish police set into action. The, I must admit the very polite copper asked his boss what to do with this press-card wielding foreigner who had already confessed (I was not tortured by the way) to carrying batteries in his camera.

This copper with approximatetly two stripes (I'm not sure) was obviously too junior to deal with the potential terrorist that I was and so I was ordered to wait around until the prime minister or someone or other gave the go ahead.

I was finally allowed in, batteries and all, only to discover that the silly coppers had failed to take my cigarette lighter. The People 1: Idiots 0.

Well it was crap. As Viking Kanka Jens said "to think I gave up a 50-kilometre cross country ski run for this"

True, that proves that Viking Kanka Jens is a complete madman but it doesn't take away the fact that both Genclerbirligi and Ankaragucu were rubbish today.

There was actually a pretty good crowd, around 13,000, but for the first 20 minutes we were given complete dross.

Well, not quite 20 minutes as Ankaragucu scored on the 13th with a bloody good but flukey goal. The ball was worked up well on the right, a slightly miscued pass was sent in and from outside the box and someone or other banged it right into the corner of the net. I think he was as surprised that he had scored as we were.

I have to point out here that Marash Kanka (an Ankaragucu supporter) at this point got a very bad look from the old fellow in front of him (too right too I say. Hakan was extremely polite today but he looked too bloody happy in my opinion).

So Ankaragucu were one up, David and Suzanne arrived at about the same time and the crowd had still not been warned for throwing rechargeable batteries at the linesman.

At this point you should imagine a game of ping pong where no one actually hits the ball.

Despite the fact that Genclerbirligi had all the ball there was just no way we could get through. I admit that some of this was due to the defence, Ankaragucu justifibaly shut up shop when they went 1-0, but Gencler just weren't performing up front.

Time and again we had a nice midfield move but never did it result, well very rarely, in something to actually to get us off our newspaper-clad seats.

Having not seen any reports, I can't say who sent the cross in from the right but whoever it was I'm prepared to give him a big kiss. In the end the ball met Isaac Promise, the man who I have I given so much crap on this site, who just tapped it in. This was a 90 plus minute goal, but unlike those Istanbul teams it didn't need a penalty to get it.

So that's it. It was 1-1. By no means the result I wanted, but one which keeps both Ankargucu looking good (ie not being relegated) and thanks to Besiktas drawing with Fenerbahce tonight... keeps Gencler in the hunt for the UEFA spot.

There was one other bright point today, a very encourging cheer as the match kicked off of "Burasi Ankara, Burasi Istanbul degil", ie: "This is Ankara, this is not Istanbul". In other words the Gencler fans were saying "stuff you Istanbul supporters" and at the same time saying well done to the Ankaragucu fans... the teams then marched together to receive the cheers of both sets of fans.

Unfortunately Steve, a veteran of many Istanbul matches, said something in the middle of the direness that was today's match "true, this is definately not Istanbul football"..... Hmmm. Well, at least he bought a Genclerbirligi scarf which is more to say than the rest of you Ankara people.

PS: Not a single battery was thrown during the match. The Ankara police should be proud!

EDIT: (Monday Feb 27) I've taken Eski Kanka Jim's points to heart and edited this a bit so as not to offend the parents of the legions of under 12s who read this blog. By the way you can click on the picture to get an even bigger version. From L to R: Viking Kanka, Oz Kanka, French Kanka, Istanbul Kanka and Marash Kanka (unfortunately Smart Arse Yankee Kanka and Mrs. Smart Arse Yankee Kanka hadn't arrived at the time the photo was taken.
By Oz Kanka - February 27, 2006