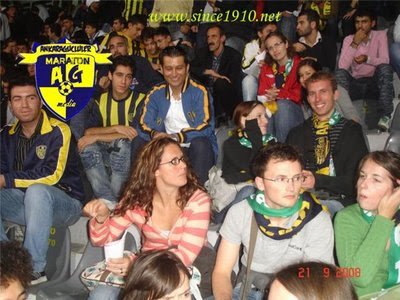 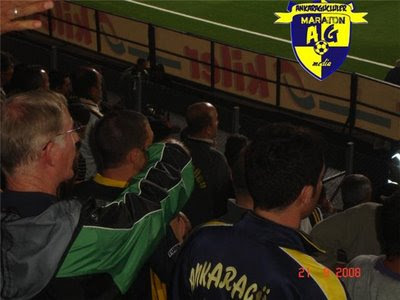 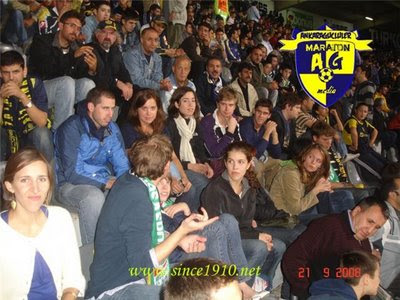 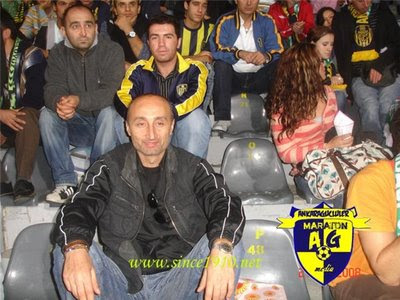 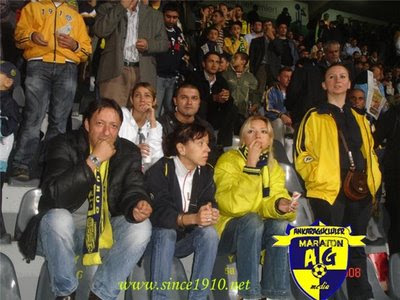 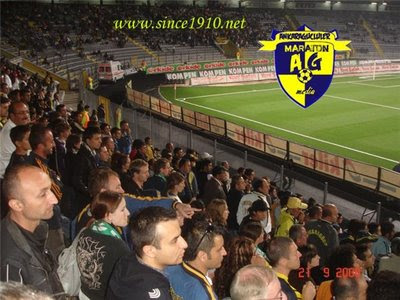 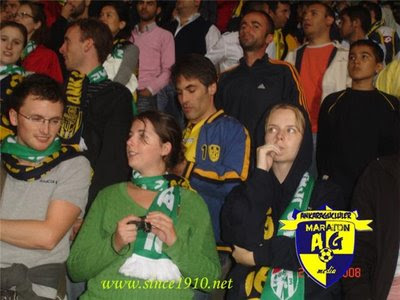 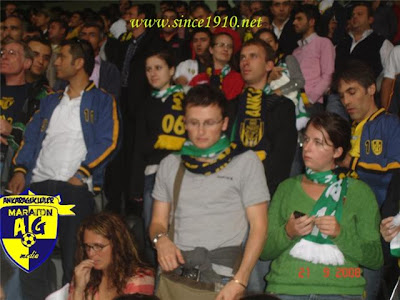 Frustration, disappointment and a battle. We had it all in Ankara last night, except goals !

ANKARAGUCU 0 Istanbul BBS 0
The evening started off well enough when we met in The Chopin with the rain pissing down. Marash Kanka Hakan, Selda Kankie and I were first to arrive followed by Mountaineering Kankas Robbie and Judy with their entourage of 27 newcomers to Bilkent University. Too many to mention by name, but they came from far and wide – Canada, USA and Ingallind. They were closely followed by Maniac Kanka Harun, Yankee Kanka and Battle Damaged Kanka Damon with a heap of Ankaragucu scarves for the new kankas.

Lots of `Kodak Moments` which will hopefully end up here in the next day or two.

There then followed the logistical problem of ferrying everyone to the same meeting point at the Stadium in a fleet of about 9 taxis. Well, we did it, but only just !

The Stadium was only half full with only 2 or 3 brave souls in the away end. Lots of singing and dancing from the Ankaragucu tribunes as usual, and unusually, a distinct lack of Police in the tribunes. This was to prove an error of judgement later !

The match got underway with Ankaragucu in full-on attack mode but I have to hand it to the BBS defence – they were also in full-on mode and were dealing easily with the diminutive Jaba and Mehmet. Gokhan was proving a problem for the full backs but every time he slung over a cross the `giants` at the heart of the BBS defence were clearing with ease.

I counted only one clear chance in the first half when Jaba fired wide, but apart from that, the BBS goalkeeper wasn’t troubled. Serkan, on the other hand, had a few good saves, and not for the first time this season, received my Man of the Match award.

Both defences were guilty of hoofing the ball out of defence. BBS were content to hoof it anywhere and were obviously happy with one point. Ankaragucu persisted in hoofing it up to Mehmet, but even he was dwarfed by the BBS `giants` and rarely won anything in the air.

BBS came more into the match in the 2nd half and Serkan again made 2 outstanding saves to save the blushes.

Leandro’s introduction half way through the 2nd half added some bite to Ankaragucu’s attacking options but all credit to the BBS defence for their efforts. My guess is that it will take a good team to break them down this season.

Ankaragucu’s woes continue and with 2 points from 4 matches confidence is low.

The frustration of the supporters finally snapped near the end when fighting broke out in the Gecikondu end. God only knows why they decided to fight each other. Also, it’s not the first time I have seen this happening !

On the final whistle the atmosphere was tense, but even at that stage there was no warning of what was to follow.

We exited the Stadium and grouped together under the columns and just as we were preparing to go for our taxis all hell broke loose.

Gecikondu and Maraton were in a serious running battle all around us and we were caught in the middle, and with Police batons flying it was bedlam. Also, at this point some of the new kankas became detached from the main group and we lost contact.

We then retreated back into the Stadium for safety under the protection of a few policemen while the remainder of the under-strength policemen tried to deal with the battle.

Eventually we made our way around the perimeter of the Stadium to a minor gate with the battle still raging outside the Stadium. Fortunately, we made contact with the other group of kankas and we came together in one piece.

A disgraceful exhibition from our own supporters and not the advertisement we wanted to show our new kankas. However, all credit to all 27 for being philosophical about it, and as I explained to them, it would be the last match on the fixture list which I would have expected trouble.

The upside is that we all escaped unscathed and we took off to the Knight and Flight Pub to `lick our wounds`, congratulate ourselves for escaping, play some darts and more importantly …… to drink some Efes !

So, another battle story to enter the annals of the Blog history. Let’s hope it’s the last !

To the future then and the next home match will be this Wednesday when Ankaragucu plays Giresun in the 2nd Round of the Cup. Waiting to hear KO time which I will post as soon as possible.

Next Sunday it is the Hacettepe v Ankaragucu league match. KO 8pm and so meeting in The Chopin from 5.30pm.

I am planning to attend both and will be praying for an end to hostilities !

PS..... Apologies from me to the Gencler Kankas for failing to turn-up at The Cappadokia to watch the final stages of the Fener v Gencler match. I accept full responsibility and owe you all a beer at the very least !
PPS ..... 23 September. Photos of the new `mesmerised` kankas taken by Maniac and Yankee Kankas.
By Eski Kanka Jim - September 21, 2008