Bruce and James meet the Ambo

It was a private conversation in which nothing of any importance was said, says Oz Kanka with his journalist hat not only off but squashed in under the seat.
The Australian ambassador, Peter Doyle, invited Genclerbirligi Aussies Bruce Djite and James Troisi over for drinks at his residence Monday afternoon. A one-hour meet and greet session turned into a three-hour discussion on everything about Gencler, Turkey in general and the cultural difficulties that the new blokes are experiencing in Turkey, as well as the all the wonderful things they are learning about our great city (although admittedly they say they are training so hard that they have hardly had any time to learn much about Turkey).
As I said, this was an "off the record" meeting and so I'm not going to say much more. What I can say however is that the two Aussies now at Gencler are keen and ready to do well. They are pretty nice blokes into the bargain. And before he kills me, so is James' dad Alby (hope I got the spelling right). I've handed them all "round ball in Ankara" business cards and so if you are reading this James or Bruce or Alby, click on the "contact us" button to the right of this post and send me your e-mail address so we can get you all incorporated (or is that intoxicated) into the expat community here in Ankara. Dinner at my place is the first offer.
A big thanks to the Australian ambassador for hosting the informal drinks. Oh yes, and also thanks to Emin from Red Lion darts fame for showing the boys (and by God I did feel bloody old sitting next to the two players) that at least one Aussie Turk supports Gencler.

And one more thing before I forget, James' dad Alby said that he was the man behind the James Troisi website. 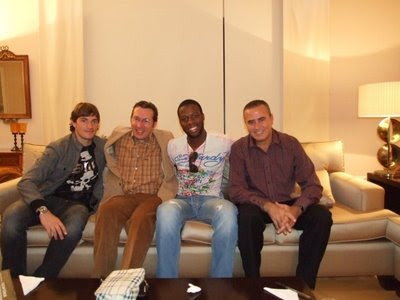 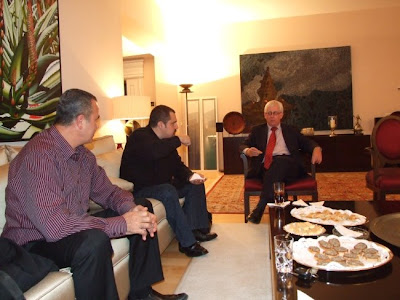 Left to right: Emin, James' dad Alby and HE Mr. Peter Doyle (not often that we ever bother with honourifics but as I was drinking his beer I guess I ought to call him His Excellency this time at least).
By Oz Kanka - September 29, 2008