All ale the victors

What a day, what a night. Us Gencler fans don't often get to hoop and hollar, to jump up and down and to scream in delight. But tonight was the night. What absolute pure joy, this was a match I will savour. We took down Fenerbahce 1-0. I repeat, we took down Fenerbahce, the team of Carlos, of Alex, of Delgano and we made them look like amateurs. 1-0 was the score and it could have been a hole lot more.

Off to the Red Lion Club for the British Ale Festival and what a joy to try out something that isn't Efes lager. The club was filling up nicely for the festival but some of us had more important things written down in our agendas... well except for Emin and Spine who decided that they preferred to stay in the nice warm club drinking English ales rather then venture out into the snow to watch Genclerbirligi.

If I can remember rightly I had myself an Abbot, a London Pride and then a Bombadier before heading off to the Chopin to find the rest of the crew. It was a plain old Efes at the Chopin where I met up with the Australian Ambassador Peter Doyle, his son Patrick, wheels man Ceyhun, Dan the Man, a US spy who has been checking out Izmir recently and good old Marash Kanka Hakan.

Off to the stadium, where there was no snow at all, and on to the match I will remember for a long long time.

Flying Dutchman Kanka had managed to get himself away from the British ales and joined us in the stadium, as did Ertank Kanka.

It was a decent crowd for such a cold night. The Fener fans were out in force as well, including many sitting in our section which meant that Carlo, Ertank and myself had to stand for the whole match. Oh well. We started off a little bit jittery but all was looking cool. Jedinak sent a free kick into the wall at about eight minutes but we were attacking. We were looking okay. Then on about the 15th minute we had a free kick a good ten feet outside the penalty area. Aussie Jedinak stood up and wacked it hard, the ball came off the maestro himself, Carlos, and Fener goalkeeper Volkan didn't have a chance. 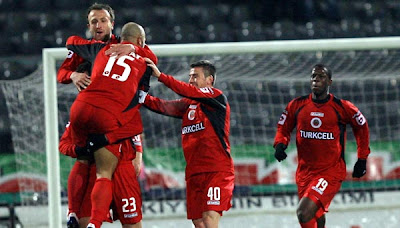 I'm not going to write much else about the match. All I will say is that while the goal was lucky we played brilliantly from then on. All of our passes were hitting the intended person. We were tackling like hell, every player out there had their heart totally in the match.

For you Aussie readers, Troisi was sidelined tonight thanks to having accumulated four yellow cards in the season. Aussies Bruce Djite and Mile Jedinak both started tonight and both were bloody good. Bruce was replaced with about 10 minutes to go but the general feeling amongst the Gencler fans that he has cemented his place in the first 11 ahead of Kahe.

We missed plenty of chances, Aussie Bruce should have scored, as should have Burhan and Mustafa Pektemek, but by God this was a performance to be proud of. We whipped them well and good.

I'm not sure how many readers will realise how big this win is for us, and why I am forgiving Gencler for not putting the match beyond doubt much earlier.

This was Fenerbahce, the team that has the money to buy all of our players twenty times over. This is a team which is considered to be the most popular in Turkey. Thousands upon thousands of Ankara people support this team. These football fans should be supporting a local team, but instead opt for the flash rich boys... pathetic.

Not only that, this is Prime Minister Recep Tayyip Erdogan's team.

When the referee blew his final whistle we jumped up and down and hugged strangers. We had stuffed Fenerbahce and silenced their supporters. Been a long time since I have wanted to write that last sentence.

Then it was back to the Red Lion Club, more British ales and dancing. What a fucking brilliant night.

EDIT: Just saw Battle Damaged Kankas news that apparently Fener are complaining about the artificial pitch. Thing is, Flying Dutchman and myself predicted the same thing at about half time, the complaining that is.

EDIT II: I should add that Fenerbahce were absolute rubbish tonight. They couldn't get their passes sorted, they weren't tackling with vigour and they weren't running. They looked like a very demotivated team. I expect Aragones is to blame.

EDIT III: And here is the goal for those of you who can see youtube