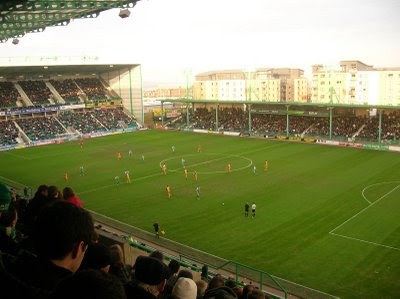 There was a good turnout of kankas at Easter Road Stadium in Edinburgh yesterday. Brrraaat Kankie Laura, Paddy Kanka Paul, Hibbie Kanka Athole, Celtic Kanka Tam, his daughter the beautiful Imogen and yours truly met up at The Conan Doyle Pub in Edinburgh City Centre and then enjoyed some Scottish 'refreshments'.

The Edinburgh January sun was shining and we all changed our colours from Sari/Lacivert to Bursa and Hibernian ..... green .... but just for today !!

Tennents Lager, Belhaven Ale and Guinness were flowing and then it was off to the Stadium in high spirits ..... sounds like the introduction to an Ankaragucu post doesn't it ??!!

The sun was still shining over Leith when Derek Riorden opened the scoring after 5 minutes and we were all on our feet cheering what could be one of the goals of the season. A fast break down the left caught the Motherwell defence napping and the cut back was a classic pass into Riorden's path and he left the goalkeeper with no chance.

Even without the suspended Fletcher and Bamba it was a done deal ..... right ? Wrong !!

Despite mostly all Hibs pressure in the first half, one goal was all that there was to show for their efforts. Nish was picking up most of the high balls, but with only two up front they were usually ending up in the grateful hands of the Motherwell defence.

Motherwell was gradually coming more into the game as half time approached and Hibs were having to defend as the game entered the last few minutes of the half. Captain Rob Jones was holding the defence together and Hibs new goalkeeper was in outstanding form.

The half time whistle came as a relief with Hibs starting to look a bit ragged.

Into the 2nd half and Motherwell came out looking the more determined of the two teams. The Hibs supporters were becoming uneasy as the passing became more like Ankaragucu's, ie, hoofing the ball up to the half way line in the hope of Nish picking it up. Passes were going astray and Motherwell were winning more of the ball in midfield.

At this point, Nish came off and was replaced by a midfielder and things became even more desperate in defence as Motherwell pressed Hibs back into their own half.

It was mostly breakaways from Hibs now, and from one of those, Riorden almost made the game safe, but the ball went narrowly over the bar.

Then with 15 minutes to go Hibs conceded a needless penalty when Thicot pulled a Motherwell attacker back in the box. On reflection, I believe the referee was correct. Those needless infringements in the box are usually done in the heat of the moment, and in this case there was no real danger and therefore it was an instinctive action.

The penalty was put away clinically and the supporters were becoming more restless. It pains me to say it, but ............. Hibs supporters are not as patient and loyal as Ankaragucu supporters !!!

With 10 minutes to go it should have been Hibs pressing for the winner, however, sad to say that Hibs capitulated and were lucky to escape with one point.

True enough, but today's performance didn't fill me with confidence that Hibs will qualify for European footie next season. Hibbie Kanka's reports in the next 2 months will keep us informed no doubt.

All the best from Eski Kanka in Edinburgh
EDIT..............
Photo 1 - Action from Hibernian v Motherwell at Easter Road Stadium
Photo 2 - Hibs score in the 5th minute. Smiles all round from Paddy Kanka, Eski Kanka and Hibbie Kanka in the background !
Photo 3 - Motherwell equalise from the penalty spot. Smiles disappear !! 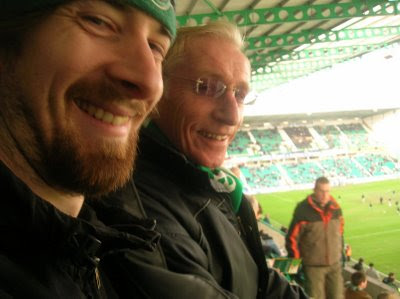 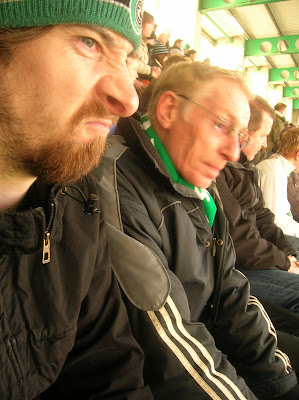