ESKI GOES TO ESKI WITH THE KANKAS 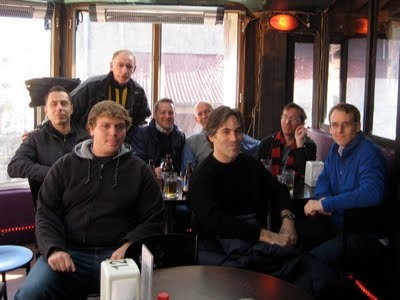 It was off to Eski's home city yesterday when the kankas went to Eski City on the High Speed Train. Thanks for arranging the train tickets go to Battle Damaged Kanka and for the Match tickets to Onur in Eski City (Roger's brother-in-law).

We left at 9am and arrived in Eski City at 10.30 after a smooth and comfortable train journey. We met up with Oz Kanka Chris and Eskisehir Kanka Roger for some pre-match refreshments after a walk around this very impressive city and a walk along the river side. 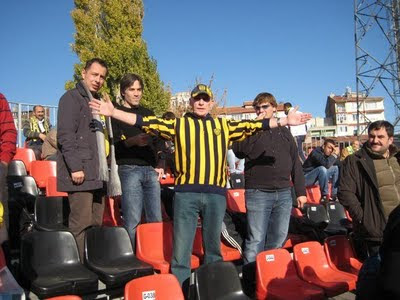 The Stadium is a bit spartan with only one side covered, and needless to say, the away end was like a pig-sty. It had wooden walkways and about 1,000 plastic seats resting on metal struts. Well, there WAS about 1,000 when we arrived, but only about 700 when we left the Stadium after the match !! Those 300 'missing' plastic seats had been trashed and destroyed during the course of the match by the Ankaragucu Gecikondu and Anti-X Boys. Photos of that, courtesay of Connect Kanka, coming soon !

In the pre-match build-up in the Stadium, I was thinking it was going to be another Battle of Kayseri when the Gecikondu Boys started to chant obsenities to the Eskisehir Tribunes and vice versa. Then came the plastic seats being ripped-up and thrown down to the peritrack. Scary moments, especially when a large brick came flying over the 'protective fence' and landed not far from us, which fortunately didn't hit anyone.

The match was underway by this time and I must confess to having only one eye on the match and the other watching for the shadows of any missiles heading towards us ! 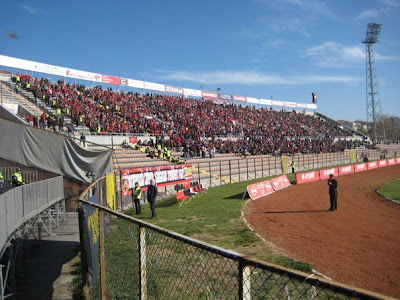 You will be forgiven if the think that is the Ankaraspor team !!!

Well, to be honest, it didn't really matter too much about the nonsence going on all around us because the footie was abysmal to say the least. The was little or no cohesion in Ankaragucu's footie and the same could be said for Eskisehir. At least Eskisehir was creating the more dangerous moves in the first half and Senecky saved us on several occasions - a big improvement on his performance from the Kasimpasa match 2 weeks ago !

Ankaragucu made no impact on the Eskisehir goal in the first half and giant goalkeeper Ivesa had practically nothing to do except eat-up all the speculative high balls being pumped into his vicinity.

Half time came as a relief and still more oral hatred was being vented back and forward between the tribunes. One of the main reason for this was no doubt connected to the almost fatal stabbing of two Ankaragucu supporters in the city prior to kick-off which Oz Kanka mentioned in his brief report. More of that when details emerge.

The 2nd half was a different story with Ankaragucu taking the initiative and playing the ball around a bit more. However, Vassell was not having an easy time of it out on the right wing - admittedly, not his preferred position. But, Meye was starting to look more dangerous and he almost opened the scoring with a screamer which Ivesa tipped over.

Again, Meye was put through but he sent a lame shot at Ivesa when the cool-head would have taken the obvious route to the corner of the goal. Other chances came and went for Ankaragucu but Man of the Match, Ivesa, kept a clean sheet.

There were two red cards. Doga of Eskisehir had the first one half way through the 2nd half - I must admit to missing that one with all the problems and bedlam going on around us. Brabec received the other 10 minutes from the end for a 'fair' challenge, in my opinion.

The referee, Cuneyt Cakir, couldn't hide the fact (from me anyway) that he had forgotten about the 1st half yellow he gave Brabec. There was a delay in pulling out the red card after the 2nd yellow. In my opinion he had obviously forgotten about the earlier yellow and had no other option but to follow through with his TWO mistakes by giving him a red. Rough justice, but of course, he will never admit it !! 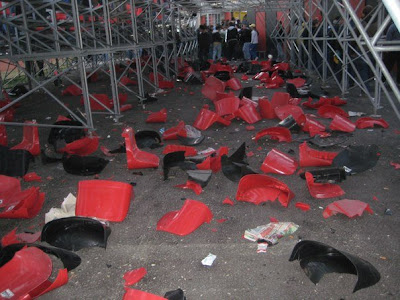 Back to the City Centre one hour later to join up with Oz and Roger. We were 'detained' by the Police for our own safety !!!

However, apart from only winning one point, it was a really enjoyable visit to a great city. The riverside walkways with its many cafes, restaurants and pubs would put many other Yooro cities to shame. Shall we go again next year ? Mmmmmm, I suppose it will depend on how deeply the animosity develops after yesterday's stabbings.

If I was an Eskisehir supporter, I would NOT come to Ankara in the 2nd half of the season !!!

Next up is the home match against 2nd bottome Club Denizlispor next Sunday KO 2pm.

Most of the kankas will be out of town next weekend during the Kurban Bayram holiday so I may well be there on my own. I'll be in The Chopin at midday if anyone can make it.