Ethiopia feels the power of Ankara! 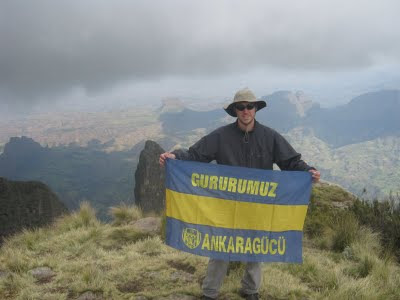 This relates the story of yet more mountains claimed for our beloved team for Ankara! Ankara Gucu!!!!!! The two peaks in question are called Imet Gogo (3926 meters) and Bwahit (4443 meters). These peaks were claimed as part of a five day trek in northern Ethiopia's Simien mountains. It was one of the best treks I and my kankie have ever had the pleasure of doing. We saw lots of animals as well.

The first picture is of myself with the flag of champions on the top of Imet Gogo, gaping chasm in the background. The second is of myself, Bini (our guide), and yet another gun-toting scout. If anyone out there can tell me what kind of gun he's holding I'd appreciate it. They only knew the Amharic word for it which translated into "snake killer". 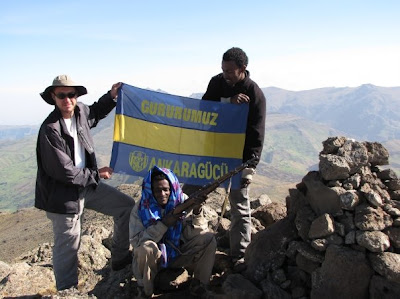 The next big challenge is of a different sort. I will attempt to take the flag of Gucu an astonishing 40 meters BELOW seal level. It will be the lowest the Gucu flag has ever been (even though all I'd really need is a bathtub). Hope you enjoyed the pictures. Miss you guys.