ANKARAGUCU ARE THE PARTY POOPERS !

I thought the Ankaragucu players read our Blog ? Obviously not, and .... nobody informed them that Friday night's party to welcome Bellshill Kanka Nadeem and Weegie Kankie Rebecca to Ankara was supposed to continue into Sunday and beyond !

Three lapses of concentration from the Ankaragucu defence did the damage last night. The fact that Fener gave a disciplined and uncompromising display also added to Ankaragucu's woes. More on that subject in a moment, but first .....

They were given a Kanka Welcome in the Beyzade Restaurant on Friday night in typical Turkish Style, ie, mezze, pide and kebabs, all washed down with gusto by copious amounts of Raki and Efes - not forgetting the Ouzo supplied by Phillie Kanka Jamie ! Oh yes, and not forgetting the entertainment by the Fasil Group and the luvllie delectable lady singer with the blonde hair and the luvvlie ..... hmmmmmm ..... voice !!!

No doubt Nadeem will have something further to say about it in the comments section later ?!

Fast forward to Sunday and we all met up in the Beer Bus Bar for pre-match refreshments. Nadeem, Rebecca and I were first in, followed by Oz Kanka Chris and Mini Oz Kanka Mathew who couldn't come to the match. 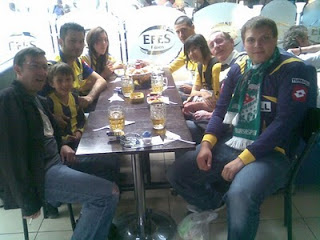 Next up was Jamie, Battle Damaged Kanka Damon and then Maniac Kanka Harun and his luvvlie daughter Hazal.

At this stage we had to split into two groups due to a problem acquiring match tickets, but all credit to Jamie for achieving what could be described as the impossible task of finding tickets in the mayhem of the ticket box.

Nadeem, Rebecca, Jamie and Damon went to Gecikondu, while Harun, Hazal and I went to our normal place in Maraton where we were joined later by Rip Off Kanka Erman and Kaleci Kanka Tansu.

Two of Tansu's friends who were supposed to join him were 'detained' by the Police outside the Stadium for some minor misdemeanour which left Tansu with two extra tickets (they were expensive !). Oh dear. Nadeem now has two virgin match tickets as souvenirs !!

So, it was all razzmatazz in the Stadium before the KO with Maraton, in particular, leading the way. Gecekondu finally woke up and joined in the carnival atmosphere.

With Vittek injured and Vassell just returning from injury, the starting line-up in attack looked a little 'powder-puff' ... and so it proved.

Fener looked 'up for it' from the KO and Ankaragucu was defending in depth and sometimes in desperation. High balls out from goalkicks and free kicks to Ilhan Parlak were being swallowed up by the Fener defence, so Volkan had an easy night.

At times, Ankaragucu didn't seem 'in the mood' as much as last week when the played Trabzon off the park, but in all fairness, it was probably down to a greater desire to win from Fener.

On the 25th minute mark I was hoping to play it out till half-time and let Lemerre try new tactis in the 2nd half, but the first on many blunders in the Ankaragucu defence put paid to that notion.

From a Fener corner swung over by Alex it was too easy for an unmarked Mehmet to fire in a header to open the scoring.

Not content to learn a lesson from that basic defensive error, Ankaragucu compounded the mistake by allowing Fener to do a reprise just after the 2nd half got underway.

I don't want to point the finger at any particular player, but Serkan totally mis-read the flight of the ball from the corner and Guisa, lurking at the back post - unmarked grrrrrrr - had the simplest of tasks to make it 2.

Worse was to follow in the 70th minute when Christian latched on to a loose ball in midfield and with the Ankaragucu defence backing off, and nobody anywhere near Christian, he decided to have a pot-shot from outside the penalty box. i suppose he muttered something to himself like .... 'wow, this is my lucky day, nobody wants to tackle me' !!

He sent in a swerver which totally deceived Serkan, and was it any wonder that Serkan was left helpless with a defence which was posted absent ??!!

There is no doubt that Fener deserved to win the match. With 7 goal positions during the match to Ankaragucu's 2, the statistics speak for themselves !

Time to head back to the Beer Bus and drown our sorrows we thought.

So, not the party that we were hoping for to give to our visitors from Glasgow, but I'm sure they will take back some happy memories from their brief visit to Ankara.

Next Saturday KO 7pm will be Ankaragucu's last match of the season away to Sivas and with relegation issues already resolved, the only thing for both teams to play for is .... pride.

Gencler will play their last match at home against Galatasaray on Sunday KO 8pm.

I hope to have some photos soon from the weekend's various activities and they will be added when they are received.