ANKARAGUCU LEAVE IT LATE IN THE TURKISH CUP 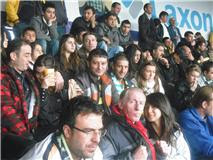 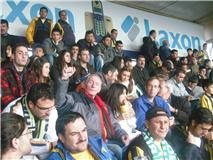 Ankaragucu had nerve ends jangling last night and left it late to eliminate Tokat from the Turkish Cup.

The Terrible Two (Maniac and Eski) were the only kankas brave enough to attend what was ultimately a poor match. True enough, Ankaragucu scored three fantastic goals, but all credit goes to Tokat for refusing to throw in the towel.

Tokat seemed in awe of Ankaragucu in the first half and it was mostly one way traffic with Mehmet Cakir guilty of wasting several chances by balsting the ball wide or over.

The Tokat defence was growing in confidence but it was finally breached after 25 minutes play by Sapara (who else ?!) who fired in a long range rocket from outside the box which flew into the net with the goalkeeper well beaten.

Just before half time Sapara went down off-the-ball and was stretchered off. This will be a massive blow if he joins Vittek on the long-term injury list.

Into the 2nd half then and much to our frustration, Tokat began to take control in search of the equaliser. Ankaragucu was confined to breakaway attacks, and from one of those, Meye almost scored but sent his bullet of a header just over.

It was still Tokat doing most of the attacking but on the 70th minute mark, Metin picked up a pass just inside the Tokat half and beat two defenders going hell for leather. He then took the ball around the keeper and slotted in for a great solo goal.

Shortly after, another bullet header from Meye, but just wide of the target.

5 minutes to go, and with all the substitutes used, Aydin went down and was stretchered off to the Ambulance. No sooner had the Ambulance departed the Stadium than Tokat were back in the game. From a corner, there was a game of 'ping-pong' in the box with the ball and one of the Tokat players's got a touch to score.

Nervous glances between Maniac and Eski with 5 minutes of time added on. Can we hold on was the question ??!!

It was Meye who calmed the nerves with the goal of the match. He picked the ball up on the halfway line, beat one defender, shrugged off the challenge of a second, and closing in on goal, fired it into the corner. Thank you Meye we said as we stood up to applaud a really great goal.

So, Ankaragucu safely into the Group Stage but not an inspiring display, even allowing for the fact that Sestak and Guven were absent.

During the match we heard some mutterings of discontent about the comment made by Spine in a previous post. According to Anti-X sources, the management plan to resign after the Es-Es match this weekend with possibly Cemal Aydin returning !!! Arghhhhhhhhh !!!! Watch this space for more on this subject.

Back to league business on Saturday away to Eskisehir. The KO is 3.30pm and we will be watching it in The Beer Bus Bar.

All the best from Eski Kanka Jim
EDIT -
The two photographs which I have just added were taken by Anti-X Nehri at the Ankaragucu v Bursa match last weekend. A happy smiley bunch of kankas which is amazing considering the scoreline !!