A rollercoaster day for Genclerbirligi fans

I handed out the season tickets and we were just about to go into the cage, ie a few metres before the turnstyle, when Flying Dutchman Kanka Carlo noticed how similiar the cards were to last season's. It was then we realised that they were last season's cards and so we got out of the line. Fortunately we managed to scam three season tickets on the spot and only Oguz had to actually buy a ticket. Got to love Gencler fans.

After weeks of crap weather we finally had a nice sunny Sunday. Excellent Efes-drinking weather. Not too bad for football either. Spine and Flying Dutchman joined myself and Little Oz Kanka for the pre-match ritual. Little Oz Kanka had earlier decided that he didn't want to go to the football as he had a sore throat. "It will be very hard for me to shout," he said. "I think I will have to stay at home and play Civilization V". A minute later Mrs Oz Kanka told me that I had to have Burger King for lunch. "Where's my Gencler shirt Daddy?" Kids are so easy to bribe nowadays.

Despite the season ticket kerfuffle we managed to get in just before the national anthems and sat back and watched what was both a very enjoyable and extremely frustrating match.

Antalya came out attacking but it was us who went ahead early on when someone or other was brought down in the box. The ref made one of his few correct decisions and pointed at the spot. Billy Mehmet put it away.

Again Antalya attacked but we almost went 2-0 up after a wonderful pass from Zec up front to Billy whose shot on goal was stopped by the outstretched leg of Omer Catkic.

The real start of the crap refereeing started at this point with a very dodgy penalty given to Antalya. Serdar made a wonderful reflexive save and we began to wonder if this could be our day. Zec was making real inroads and we were counterattacking with ease. Surely another goal would come soon.

Indeed it did, but to Antalya. Serdar buggered up badly by not covering the angles and the first half finished at 1-1. 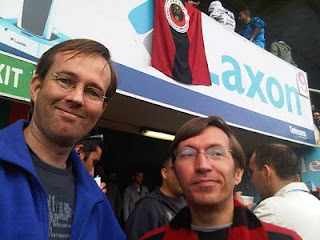 Second half and both teams put on some nice football. Although Billy Mehmet seemed to have some trouble with his first touch he was attracting defenders and leaving space for others. Then came one of the weirder goals you will see. Someone sent the ball across the Antalya goal. It was innocous stuff and Omer should have moved off his line and taken it straight away. Instead he stayed rooted for a fraction too long and then ran after the ball as it headed towards the edge of the box near the goal line. He realised his momentum was going to send him out of the box so he placed the ball inside the box and tryed to scramble back to get it. Zec grabbed the ball and fired from an almost impossible angle. In! Huge cheers all round.

Everything was going well and then Alparslan, who had come on for Harbuzi, was handed a straight red in the 67th minute. An extremely harsh decision and Alparslan stormed off kicking rubbish bins and nearby kiddies. The card pretty much handed the match to Antalya. They launched wave after wave of attacks and the body language of the Gencler players showed they downhearted. The equaliser came from a free kick. I'm not sure who was to blame. Was the wall set correctly? I have no idea. Then a few minutes later some extremely slack defending saw Tita score a nice solo effort.

Gencler finally got themselves into gear but the ref again came through with an atrocious decision to award another penalty to Antalya. This time it was the post which saved us. Dying minutes of the match and we just couldn't get the ball in, despite some all out attacks with our keeper in their box.

Match over and we called the Gencler players over. Gave them a cheer for a good effort undermined by the ref. Back to the Beer Bus to join up with the Ankaragucu crowd and news came in that Thomas Doll had been sacked. Quite depressing news. He was a good bloke coaching with his hands tied behind his back. Not only have we been hit hard this year with injuries and strange referee decisions but the club refused to allow him any say in the transfers we made at the end of the season. What sort of club does that? A club that needs change, at the top.

The supporters yesterday knew why we lost and it nothing to do with our players or tactics. That was why we called the players over at the end of the match. Didn't anyone in management see this? As I said. All quite depressing but at least all of us Gencler fans got to cheer on Ankaragucu's success. Quite a rollercoaster day.

News just in from Spine

Alparslan apologises for his red-card tantrum: "My world has collapsed," he says.

Keeper Serdar says: "No one would want Doll to go. It's the management decision and we have to respect it."
By Oz Kanka - October 18, 2010