I'm still bouncing off walls the day after one of Gencler's best wins in recent years. How great it was to silence the Besiktas fans. To come back from two-nil down at half-time to win by two clear goals. Amazing stuff.

What a lovely autumn day in Ankara for the first day of the bayram. Normally we don't get football on during bayrams but I guess the late start to the season meant they had to cram it in. It did feel a bit like having a match on Christmas Day but I have a feeling that for many fans in the crowd it was a great excuse to get away from the relatives. Not for me of course. I'm a family-type of man.

Down at the Beer Bus Little Oz Kanka and myself were joined by Spine, Oguz, Sir Eski, Flying Dutchman and two newcomers from Sweden, Robin and John. The new guys were kicking themselves that they hadn't bought 100 tl season tickets earlier in the year as tickets for last night were 56 lira. Oh well, they were about to get their money's worth.

We left Flying Dutchman and Sir Eski in the pub, Maniac Kanka Harun joined them a bit later, and got in with a few minutes before kick-off. A decent crowd, by Gencler standards, and the Besiktas lot filled their section behind the goals.

As usual we were outsung from the off. Outplayed on the field as well as Besiktas went one up after just three minutes. The defence was again to blame as Mehmet Sedef failed to keep on his man. It was soft and deflating. To be scored against so early is just depressing. 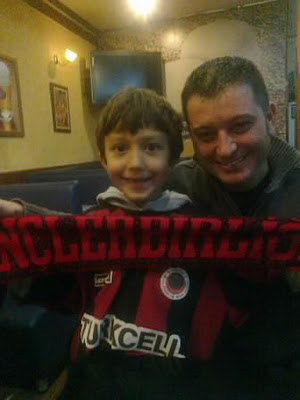 Maniac and Little Oz Kanka after the match

The team didn't seem to depressed though as they played some decent footy with Yasin getting a good shot from distance on target. There were a couple of other scrambles in the goal mouth that with a bit of luck would have seen us draw level but in the end it was Besiktas who got lucky with Genclerbirligi old boy Mustafa Pektemek pouncing on a loose ball to make it 0-2.

I then managed to lose a 1 lira bet with my son as we won a free kick just outside the box. I bet that Azofeifa would take it and Aykut would head it in. I almost won but Aykut sent it wide. 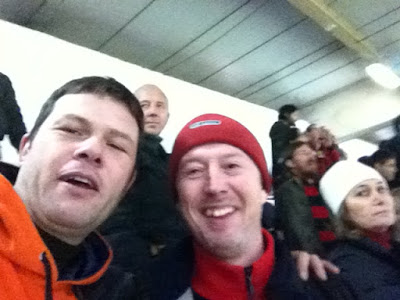 Oguz and Spine with John and Oz Kanka in the background

Half time and the general consensus was that we weren't playing too badly. Just a slight problem with the score and some rubbish referee decisions. Oh well, been there a million times before.

Text from Flying Dutchman comes in: Possession stat: "51 percent versus 49 percent. But as Sir Eski says 'possession doesn't win matches. Goals do!' We are not playing bad in my opinion. Mind you the first goal was a blatant mistake in defence. Spelled with a 'c' ;-)"

True, true. Gencler coach Fuat Capa obviously kept spirits up during the half-time break as we came out again in a positive manner.

Besiktas should have killed the match early in the second half when Pektemek found himself one-on-one with Ramazan but failed to get his shot on target.

And then the fun began.

About the 54th minute and Herve Tum (who had a pretty good game compared to recent weeks) short passes to Azofeifa. Azo takes a shot which deflected off a defender and Tum from a tight angle sends it in. The fightback begins

Just a couple of minutes later Yasin goes down the wing and sends a lovely cross right onto the head of Hursut (my man of the match) who had the Besiktas keeper diving to no avail. 2-2 and this was looking good. 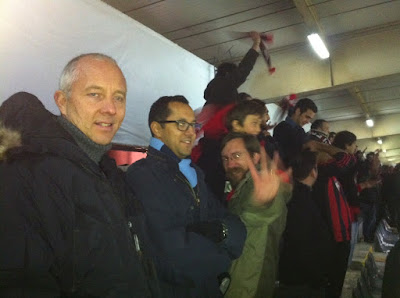 John, Robin, Oz Kanka and Little Oz Kanka after the fourth had gone in.

And then the best goal I've seen all season. Our keeper Ramazan whacks the ball way to hard and all the Besiktas defender Egeman had to do was tap it back to his own keeper. Problem was the keeper had come out. He desperately tried to stretch out to get it but had to watch as the ball, as if in slow motion, crossed the line.

We were singing and dancing in the stands but there was still 10 minutes left. Besiktas had a go but it was right at the death when we sealed it. Hursut put a ball in to Erdal who somehow or other managed to swing around and get a shot off. An amazingly difficult goal. 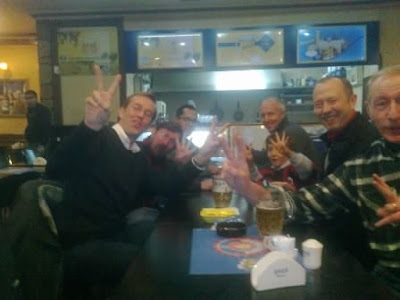 Back at the Beer Bus to celebrate

Peep, peep. What a match. To come back from two-nil down and really embarass Besiktas. Back to the Beer Bus for a celebratory beer and high-fives all round. That was simply brilliant stuff last night. Iyi Bayramlar all! Hopefully I'll put up some more photos soon.