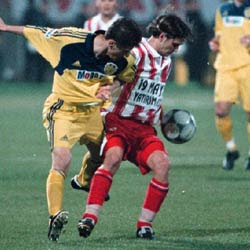 Image above taken from Habervereti

This weekend Ankaragucu and Samsunspor are up first in the Friday night game in Samsun. Both sides met in a pre season friendly where it finished 1-1. A lot has changed since then, especially the Ankaragucu playing staff, but both teams are struggling in the relegation zone.

Ankaragucu come off the back of a poor week where both Manisaspor and Istanbul BBS took three points from us, and in both games the performance could only be described as dreadful. Poor defending, another sending off, conceding penalties and of course not taking our few chances.

Samsunspor are struggling themselves and only have one win in the Super Lig to date. They came up with both Mersin and Orduspor who are both having good starts to there campaign. Indeed there only win to date was the opening game of the season at home to Genclerbirligi where they won 3-2. Unlike Orduspor who are well organised at the back, Samsun have a weak defence and there forward line are off form to. Sound familiar ? This is a game which will be won by the team who wants it most.

The Key players for Samsun will be Ekigho Ehiosun and Simon Zenke who is similar to former Karabukspor striker Emanuele Emunike in that he is quick and powerful. They also have Colombian Playmaker Alvaro Dominguez and Aristode Bance who will be looking to break his run of games without a goal. Last weeks match against Eskisehirspor ended in a 1-0 loss, but they will take comfort from there 0-0 draw at Fenerbahce a few weeks earlier.

Ankaragucu will be without Ugur Ucar through suspension for his red card against Istanbul BBS, and Jan Rajnoch through injury, although reports are saying he wants to leave the club and has travelled back home. Ziya Dogan doesn't have much to work with, but he needs to do better with the squad he has. We have some good players in Tonia Tisdell, Theo Weeks, Serdar Ozkan, Hurriyet Gucer to name a few, but they need to cut out the stupid mistakes or face been punished every week. Will we even see Jarioslav Cerny make an appearance ? Even kids like Umit Kurt and Atilla Garhan seem to be ahead if him in the pecking order.

I cant see us winning any time soon, so im going for a 2-1 win for Samsunspor, nothing of late has given me any reason to think other wise.
By Nady - November 01, 2011