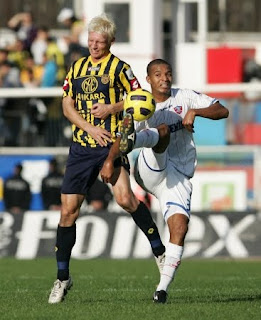 Both players have had there contracts terminated today by the club and are now free to talk to other clubs.

Stefan Senecky a Slovakian International had two spells with the club, first two seasons ago when he signed from Ankaraspor before moving to Slavia Prague. Senecky then returned to the club last season, but hasn't been able to hold down the number 1 spot due to injury and poor form. The player hasn't been paid for the last ten weeks and has decided to terminate his contract. Senecky said his farewells to his former team mates today.

Jan Rajnoch signed for the club from Mlada Boleslav and became a fans favourite for his committed performances. He played in many different positions but mostly at the centre of defence. He was one of the few players who stayed at the club through the financial mess, but returned to the Czech Republic last month due to get treatment on an injury. Reports from Czech Republic said the player wouldn't return to Ankaragucu and this was confirmed today when the player termintated his contract. Rajnoch will now have discussions with Trabzonspor about a possible move that will see him join Robert Vittek and Marek Sapara.

Good luck to both of them, especially Rajnoch who served us well, and im sure he will keep the bench warm with Sapara at Trabzon if he moves.
By Nady - November 24, 2011