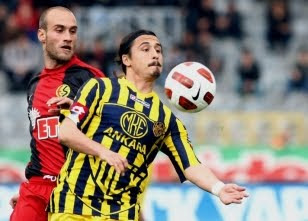 This weekends match will see Ankaragucu travel to Eskisehirspor as we try and make it two wins in a row. Reports today seem to suggest there will be no travelling fans for this match due to trouble between the two sets of fans in the past.

Eskishirspor have had a dissapointing start to the season, and find themselves in 12th Position. Consistency has been a problem, with wins of late at home to Genclerbirligi and away to Karabukspor, and defeats at home to Manisaspor and away to Fenerbahce. Last weeks match at Fenerbahce saw them play a big part of the game with ten men, they were unlucky not to take a point after Volkan pulled off a fantastic save from Dede late on.

Last season saw both meetings end in a draw, The first game ended 0-0 in Eskisehir and the return game in Ankara finished 2-2 with Fatih Tekke and Serdar Ozkan (pictured above) with the goals.

Ankaragucu grabbed there first win of the season at the weekend with a 2-1 win at home to Karabukspor as we saw in Jim's Report. Young Atilla Garhan and Tonia Tisdell with the goals. Young Atilla has come in and done a good job, and we look a lot better with Tonia out wide and Atilla through the middle. Hopefully Serdar Ozkan will be back for the game to. Two other youngsters made an appearance at the weekend in Umit Sozen and Ishak Dogan who both showed some nice touches. Its good to see the youngsters get some playing time this season.

Eskisehirspor have some good players in there side, and our defence will need to be at there best with the likes of Diomansy Kamara, Mehmet Yildiz and Batuhan Karedeniz up front, and Rodrigo Tello and Veysal Sari dangerous coming forward from midfield. They only need a couple of wins on the bounce and they are back in the chase for a champions league place. Kris Boyd who couldn't stop scoring in Scotland and England cant even get in there squad, which shows how capable there attack is.

Again I will refrain from making a prediction, as it brought us a win last week. A draw would be nice as Dublin Neil said on the Karabuk match report but i think we can go and get the three points if we defend well and take our chances.
By Nady - November 22, 2011