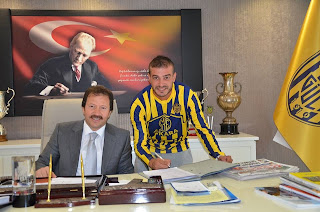 Veli Torun today completed his move back to Ankaragucu after agreeing a 2 year contract. Veli left Ankaragucu at the start of last season for Kayseri Erciyesspor but was unable to break into the first team. A loan spell at Karsiyaka last season saw him play 5 games scoring 1 goal. There has been much talk about the midfielders return to Ankara and finally the midfielder was paraded today.

Ankaragucu have also signed Levant Kale on a 2 year contract from Pazaarspor. The striker has a good record at Lig 2 level and becomes the clubs 7th signing in the last 3 days. Ankaragucu host Gungorenspor in Sunday and it looks like the team will have a host of new faces making their Ankaragucu debut.

The club also confirmed the signing of Yasin Can Degirmenci who is a 17 year old from Kizilicahamamspor.
By Nady - September 06, 2013