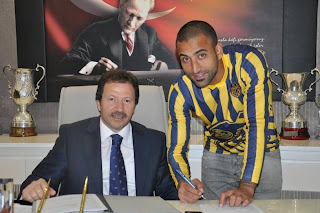 Ankaragucu completed the signing of their second player since the removal of the transfer ban. Selim Teber follows Aydin Toscali in signing a 2 year contract with the club. The 32 year old midfielder started his career in Germany with Waldhof Mannheim and also has spells with Kaiserslautern, Hoffenheim, Eintracht Frankfurt and Austrian outfit SV Salzburg. In Turkey his most successful spell came with Kayserispor. He has recently being plying his trade with Karabukspor but fell out of favour.

Like Aydin this will be a major coup for the club, as it lacked experience. Ankaragucu are expected to sign more players ahead of tomorrows deadline with Fatih Tekke, Mehmet Cakir, Ibrahim Sahin, Serhat Gulpinar, Ustun Bilgi and Umit Tutunci all in talks.

The Round Ball in Ankara would also like to pay its respects to former player Ediz who passed away 1 year ago today. The club have paid the players family his outstanding payments that were owed.
By Nady - September 05, 2013