1508: Just under 1 hour until kick off at the 19 Mayis stadium in Ankara as Ankaragucu host Istanbul Gungorenspor. Although the game is being played behind closed doors due to a stadium ban for Ankaragucu, thousands of fans have turned up to welcome the team.


So only Serhat Gulpinar makes the starting line up of the new signings and Selim Teber makes the bench. Hasan Ayaroglu, Emre Tasdemir and Gokhan Akkan are all away on international duty, whilst Serkan Sirin and Teoman Erkan are suspended.

A difficult opening game for Ankaragucu but they have enough quality to win this match. Kick off in 53 minutes. 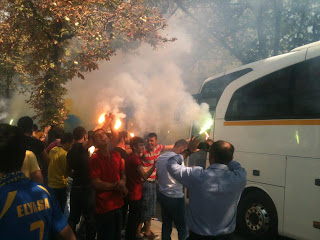 1551: Just under 8 minutes until kick off as the teams enter the pitch. Ankaragucu wearing the new home kit which can now be purchased at the club shop. 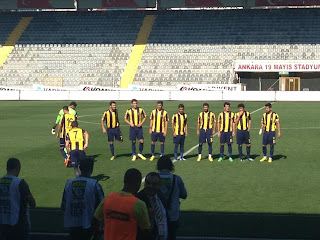 1607: Seven minutes in and it looks like Ankaragucu are playing a 4-2-3-1 formation. Mert has went closest with a shot just over the bar.

1609 - Through ball into the path of Umut Nayir who just as he went to shot the defender got back to block for a corner.

1611 - Shot from Kaan Kanak but well saved by the goalkeeper.

1615 - Gokhan through 1 on 1 with the Keeper but another good save. Need to take our chances.

1626 - Im following the updates on twitter and it seems like Gungoren have had a goal chopped off by the referee.

1629 - Serhat comes forward with the ball and finds Orhan who takes too long to get the shot away allowing the defender to clear for a corner.

1637 - Harun Aydin is yellow carder for Ankaragucu, Abdi Aktas also booked for Gungoren. The Gungoren goal was chopped off for offside.

1645 - Half Time Ankaragucu 0-0 Gungorenspor. Tight game and could go any way. Ankaragucu need to take their chances in the second half.

1702 - Kaan free kick but goes over the bar from distance.

1709 - Gurkan shoots from just outside the box but he watches as the ball goes wide of the post.

1711 - Ankaragucu so close to taking the lead as Serhat watches his header come back off the cross bar. Ankaragucu getting closer !!!

1721 - Selim Teber comes on to make his debut in place of Captain Mert Erdogan.

1732 - Nice play from Kaan who breaks forward but his shot goes wide of the post. Ankaragucu players don't seem to have their shooting boots on today.

1745 - End of normal time, Ankaragucu have 5 minutes of injury time to get the equaliser.

Full Time : Ankaragucu start the season with a disappointing 1-0 home defeat against Istanbul Gungorenspor. Ankaragucu had plenty of chances but like last season they didn't take their chances and couldn't find that goal. Next up is a trip to Istanbul next week as they take on Eyupsor who also lost 2-0 at Altay.

Hayati Soldas the new coach is already receiving criticism on Twitter with fans calling for his resignation. Crazy but this is the pressure of being coach of Ankaragucu. Its ok going through pre season undefeated, but loosing your first competitive game at home is a not the start you want.
By Nady - September 08, 2013