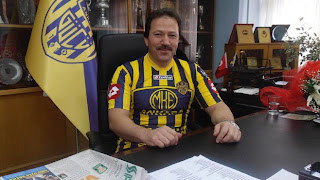 Since his arrival at the helm, President Mehmet Yiginer has saved Ankaragucu from the brink and is now starting the resurrection of one of Turkeys oldest clubs. For many years Presidents have come and gone, all rumoured to have taken money while sending the club nearer to extinction. We are all too familiar of the war between Cemal Aydin and Melih Gokcek which resulted in the club running up huge debts and suffering 2 successive relegations.

Ankaragucu are a sleeping giant, they are located in the Capital city Ankara which has over 4 million people. The city hosts many large businesses and the club have a large and loyal fanbase. We have been saying for a long time that if the club is run properly then they really could challenge the Istanbul 3. We are a long way from that at the moment, but its not impossible.

Mehmet Yiginer has brought pride back to the club, players are being paid, bills are being paid and he even managed to lift the clubs transfer ban. But its his interaction with the Ankara community and fans that has impressed most. The Ankaragucu Dirlils season ticket campaign has saw the club sell 12,700 season tickets to date. He has found investment from Ankara business men, and even all the taxi and bus companies in Ankara have the Ankaragucu badge.

Raising the profile of the club in its home city seems obvious, but its something that his predecessors failed to achieve. Mehmet bey has the support of the city and even all the clubs fan groups. They have promised to clean up their act on the terraces and no more stadium bans.

Most importantly Mehmet Yiginer saved the name of Ankaragucu and the History of the club after reports that Melih Gokcek wanted to merge Ankaraspor and Ankaragucu.

Today Mehmet Yiginer announced that the club has signed a deal with Baskent TV which will see the clubs home games broadcast Live. You also just have to look at the Ankaragucu club shop, full of stock and all 3 strips available for purchase.

We at the Round Ball in Ankara would like to thank President Yiginer for all his hard work and efforts. Long may his leadership continue.
By Nady - September 19, 2013