Season ends in disappointment for Ankaragucu ! 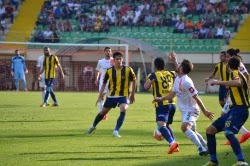 The 2013/14 season came to an end for Ankaragucu today as they lost 3-2 in Alanyaspor in the playoff semi finals. Having lost 1-0 in the first leg at home, Ankaragucu had it all to do in Alanya if they wanted to proceed to the final. Unfortunately as so often the case Ankaragucu couldn't win another important match and will now face another season in Turkeys 3rd tier.

When the season started Ankaragucu were amongst the favourites for promotion. The transfer ban had been lifted and the club signed players such as Selim Teber, Serhat Gulpinar, Mehmet Cakir and Levent Kale. Everything started so well with Levent and Umut striking up a formidable attack. Youngsters Gokhan Akkan, Onur Atasayer and Emre Tasdemir were impressing in amongst the clubs more experience players.

In the January transfer window the management team strengthened the squad with signings such as Erhan Guven, Serhat Aykuz, Muhammed Gonulacar, Volkan Yilmaz, Omer Yalcin,  and Mehmet Erdem. Unfortunately none of those players have made any impact with the exception of Mehmet Erden who has shown flashes of what he can do.

Instead of winning promotion back to the PTT lig as champions, Ankaragucu instead had to settle for a playoff place after finishing 3rd behind Altinordu and Alanyaspor. Despite beating Alanyaspor a few weeks back, the team lost home and away in the play off matches. Metin Aydin and Kaan Kanak gave Ankaragucu a 2-1 half time lead in Alanya which would have been enough to take them into the final. Alanyaspor fought back in the second half and yet again the Ankaragucu defence let the team down.

The future doesn't look bright for the club with more lost revenue due to having to spend another season in the Turkish 3rd tier. A clear out will be needed in the summer of all the old players who are past their sell by date.

The first signing the club should make is the return of Mustafa Kaplan as coach. You can only wonder where we would have been had he been in charge this season.
By Nady - May 27, 2014