WAS IT AN ANKARA STORM OR ….. AN ALANYA STORM ?

Take your pick – we had both in the 2nd Half.

A dangerous Electric Storm arrived in the 2nd Half with lightning bolts all around us and thunder claps almost as loud as Gecikondu in full voice. It soaked the players and us as we left the Stadium. So much for the weather report. Well, it was more interesting than Ankaragucu's footie !!!

Now to the Alanya Storm !

But first, let's begin at the beginning !

Maniac Kanka Harun, Battle Damaged Kanka Damon and I met up at the Stadium and were joined by Gorgeous Kankie Basak after a long absence from Maraton (she's a real Gecikondu girl !). 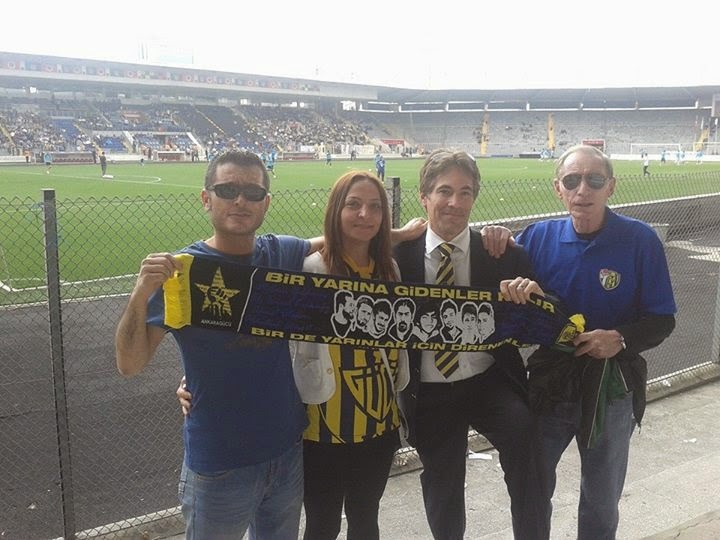 Arriving at The Stadium with the Away End in the background.    Smiling at this stage, but not so happy at the end of the match !!

The Stadium was full again and there was an air of expectation after the performance last week against Bandirma. Only about 100 in the away end.

The noise generated by the 5 tribunes was amazing, but if we thought that it would intimidate the Alanya players we were mistaken. Alanya showed their mettle and it has to be said that Bayram was the busier goalkeeper throughout the match.

Ankaragucu's only real chance in the 1st half fell to Kaan in the 5th minute when he sent in a screamer of a free kick from about 30 yards out but it was just over the bar.

Then one minute later came the confetti show from Maraton followed by the Bursa song in the 16th minute.

Ankaragucu almost scored an own-goal in the 20th minute when a fantastic header from Ankaragucu's No4 beat Bayram but went just over the bar. Sighs of relief all round and looks of disbelief between Damon and I !!

Approaching half time and Ankaragucu started to show some urgency, but as we know, having the lion's share of possession doesn't necessarily win matches !

So, going in at half time all square was a fair reflection of the match I thought, and we were still in optimistic mood with Ankaragucu attacking the Gecikondu end in the 2nd half.

Ankaragucu started the 2nd half of the match in attack mode, but they were not getting a grip of the game.

There were too many high balls being punted up to Umut (now where have I heard that statement before ???!!!) and the Ankaragucu midfield was being bypassed time and time again. Alanya was fighting like tigers and winning all the 50/50 balls. Ankaragucu was hurrying their passes which consequently meant that they were going astray, and they kept losing possession as Alanya started to take control of the match.

There were only four Ankaragucu chances in the 2nd half and they were all from free kicks about 25 yards out and in roughly the same position. All were taken by Selim, the 1st sailed past the right post, the 2nd was well saved, the 3rd was deflected for a corner and the 4th rebounded off the wall to safety.

15 minutes to go and Alanya should have scored after a great move, but with only Bayram to beat, the attacker sliced his shot out of play.

5 minutes later and the inevitable happened. From a well taken corner, Aydin Cetin rose unmarked to head in a classic goal which he can be well proud of.

The expected Ankaragucu final 10 minutes onslaught never materialised as Alanya controlled the match and eased to an impressive win.

Perhaps the injury to Captain Mehmet in the 2nd half had an effect on the Ankaragucu players as he was whisked away in an ambulance, however, that can't be used as an excuse for a poor Ankaragucu performance.

At the final whistle the Ankaragucu players came across to Gecikondu and Maraton to applaud the supporters. A fine gesture which hopefully means that the players have not given up hope of turning this semi-final around in Alanya on Tuesday. It is sure to be a battle and a match which the tactics must be …..... attack attack attack !!

Off we went through the rain (weather report again !!) to the Express Pub near Guven Park in Kizilay to drown our sorrows. We will be there again tonight to watch the Champions League Final.