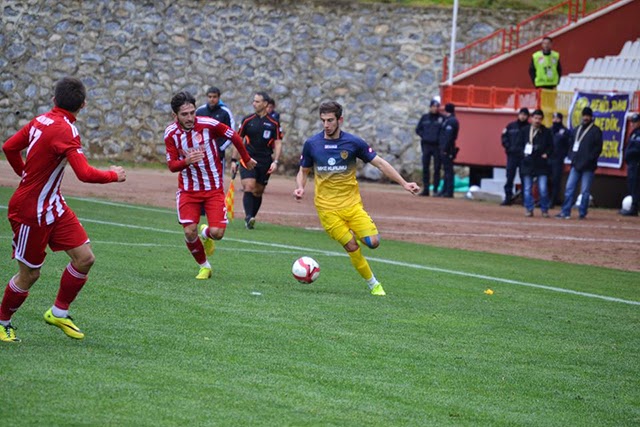 I know last weekend we agreed that its difficult to criticise this Ankaragucu team as we have lost most of our key players and have a lack of experience in the team. However the team has now went 4 games without scoring from open play, and they could be still playing right now and wouldn't have scored.

This was the first full game I've saw of Ankaragucu this season, and it was woeful, possibly the worst Ankaragucu team i have seen. No disrespect to the home side, but i expect more in these type of games. When you look at the Ankargucu team today, Gokhan is one of Turkeys best young Goalkeepers, Orhan, Aytac, Volkan, Serhat, and Hasan all have Super Lig and PTT Lig experience. Umut Nayir and Levent Kale were the leagues top scorers last season, and then on the bench both Gurkan and Teoman have played in the Super Lig.

Ankaragucu started the first 5 minutes of the match the brighter with Hasan having a chance early on but he shot straight at the goalkeeper from just outside the box.

A couple of minutes later Aytac almost gifted Gumushanespor the opening goal, but Hakan blasted his shot over from about 25 yards. Both Volkan and Aytac struggled in the first half to cope with the pace of the Gumushanespor attack.

Gumushanespor started to dominate the match and had a couple of half chances one of which Gokhan saved. Soon after they took the lead and it was another defensive mistake from Aytac and Volkan who let in Fatih who shot past Gokhan who will be disappointed as he was beaten at his near post.

The goal was deserved and Gumushanespor dominated the first 30 minutes of the match. Ankaragucu did come back into the match for the last 15 minutes of the first half but failed to create anything worth of note. Hasan and Mehmet looked dangerous in flashes with their pace but were never involved enough to trouble the home side. Serhat looked well of the pace leaving Harun in the middle of the park on his own.

One of the bright sparks in the Ankaragucu team was Onur Atasayer, he looks a talented young player who will go on to play at a higher level. Umut Nayir was never given the service to threaten Gumushanespor and Levent looks a shadow of the player we saw last season.

Into the second half and Ankaragucu were the stronger team and had more possession. But yet again they failed to create any chances or trouble the Gumushanespor goalkeeper. Orhan has a volley that went inches wide and Umut had a half chance that didn't trouble the keeper.

It really was a disappointing performance and i don't see any hope for this Ankaragucu team. It will be tough for Ankaragucu to stay in this league. Personally i would drop Serhat, Aytac, and Levent and bring in the likes of Batuhan Gulcan, Gurkan Alver and Ramazan Adiguzel for the next game.

I dread to even think the outcome of the game against Istanbul Basaksehir in a couple of weeks time.
By Nady - November 23, 2014