The Ankaragucu Players Embarrass the name of ANKARAGUCU ! 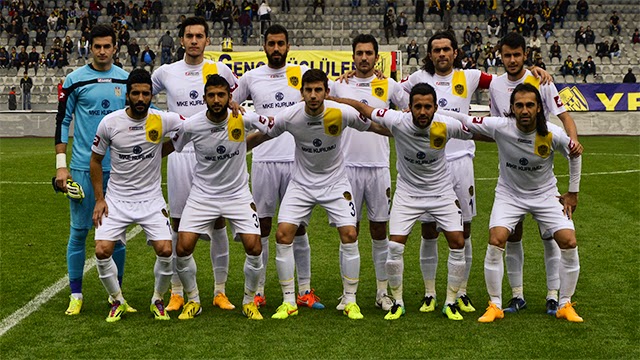 This will be one of my shortest reports on record because I have no positives to relate from an Ankaragucu perspective.

The kankas met up at the Stadium for the early 1.30pm KO – Ahmet, Cider Kanka John, Battle Damaged Kanka Damon, Tony and Jessica.

The Stadium was eerily quiet again with Gecikondu and Maraton only half full and the Sol Kapali closed.     Apparently, the feud continues !!    However, I noticed a Sol Kapali banner draped over the fence at the scoreboard end, but very few supporters near it !    There were only about 20 in the away end and 10 stewards to keep them under control !!

It took until the 12th minute for anything of note to happen when the Kocaeli goalkeeper took the ball off Levent’s head just before he was about to head it in.

Then in the 23rd minute a Kocaeli defender was adjudged to have handled in the box and the referee pointed to the spot.    It took about 2 minutes for the protests to be brushed aside and then Levent slotted it in.    Was this the beginning of an Ankaragucu onslaught ?    Wrong !!

It only took one minute for Kocaeli to equalise from a corner when Levent headed in for a fantastic own-goal !

2 minutes later it should have been 2-1 to Kocaeli when a Kocaeli attacker had the goal at his mercy but shot tamely at Gokhan.

Kocaeli still had their tails up and were looking the better team with half time approaching.   Then, 2 minutes from half time they were awarded a free kick just outside the penalty box in the centre.    It was a well taken kick just over the wall, and with Gokhan beaten, the ball hit the underside of the bar and in.

Into the 2nd half and the match was on a knife edge with both teams attacking, although I have to say that Kocaeli were looking the more likely to score with their dangerous breakaways causing the Ankaragucu defence all sorts of problems.

Gokhan came to the rescue on the 70th minute mark when he tipped a goal bound shot over for a corner.

10 minutes lates the Kocaeli No9 should have scored when he headed over with only Gokhan to beat.

Ankaragucu could have played for another 90 minutes and not scored.    They were back to their old tricks again of hoisting the ball from defence up to Umut who was invariably surrounded by 3 defenders.    Their passing was abysmal and they hadn’t a clue what to do when they came anywhere near Kocaeli’s penalty area.   Also, their crosses were high and wide too often.

Embarrassing is the only word to describe Ankaragucu’s football today, and but for some poor finishing by Kocaeli, it should have been a more convincing win for them.    True enough, they are not a great team, but they were well organised and fully deserved all 3 points.    Also, as Battle Damaged Kanka Damon said ........... ‘they were well coached’.

Back to The Chopin Bar Damon, John and I trudged to drown our sorrows with yummy Efes !!

God help us next weekend when Goztepe come calling.    They will be rubbing their hands in anticipation of an easy win me thinks !!!