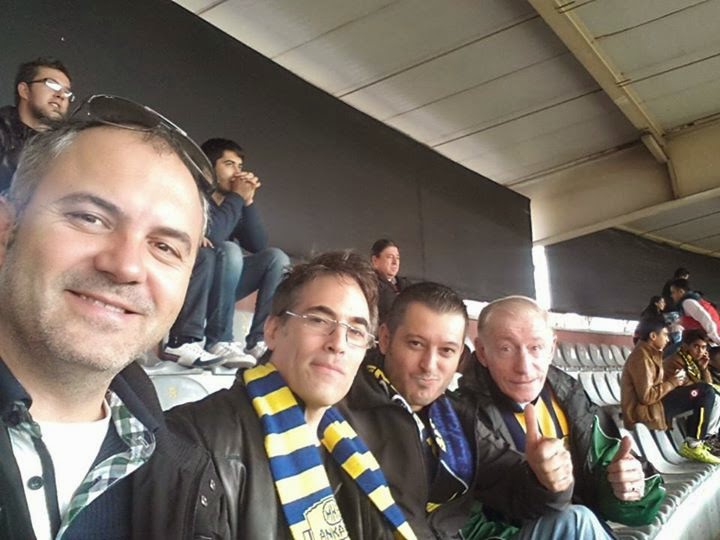 The happy smiling faces of Erman, Damon, Harun and Jim BEFORE the match !!

Ankaragucu haven’t scored in open-play for 3 weeks and it took another penalty to ‘win’ a point.   So, for a team looking to win promotion to the PTT League, this is not good news.   In fact, the future looks bleak at the moment, especially (as Nadeem reported) as Umut is being eyed-up by Eskisehirspor, and without him up front it is difficult to see where the goals will come from after the January window closes.

Lots of Kankas there today ......... the return of Maniac Kanka Harun was especially welcome, Apple Kanka Erman, Battle Damaged Kanka Damon, Cider Kanka John, Ahmet, Tony and we were also joined by Judge Kanka Nescet and his entourage of friends.

A great atmosphere in the Stadium today with Gecikondu full, Maraton almost full and the away end .............. empty !    Obviously the Goztepe fans were banned from attending by the Police.     (Historic Note ......... Ankaragucu and Goztepe fans are historic sworn enemies going back before the time of the kanka group).    Note to myself ........... must ask Harun the reason for this !!!

Sol Kapali was closed again and I wonder if we will ever see it open again this season !

Interesting point of note today was the appointment of Levent as Captain.    We will see if this is a permanent fixure or just a temporary measure.

Sad to say there was not much to say about the first half with both teams trying to play footie but failing miserably !

It took until the 23rd minute for Ankaragucu to threaten when Umut headed Levent’s cross over.    4 minutes later they had a shot, but it was wide and over.

Goztepe’s first threatening action was on the half hour mark when from a break down the left wing a shot came in and hit the post and then was cleared to safety.    However, 10 minutes later Goztepe should have gone in front when another attack down the left wing almost produced a goal.    The cross came in but a fraction too early for the in-rushing forward to connect and head in, and the ball was cleared again to safety.

Half time and Ankaragucu still hadn’t involved the Goztepe goalkeeper in any action with exception of making goal kicks and picking his nose !

Obviously Mustafa blasted the players at the interval because it only took 3 minutes for the Goztepe goalie to make a save from a direct free kick a good way out of the box.

There was certainly more urgency about Ankargucu’s play now, but still they were having difficulty in the final third with passes going astray and players hesitating when direct action was called for.

The best chance of the match came on the 60th minute mark when a cross came in from the left wing to Umut.   Good knock-down by him to set Levent up with a clear cut chance.    All he had to do was poke the ball in to the left or right, but he chose to hit it tamely at the goalkeeper much to our frustration !     It was a chance which could have turned the match but which was spurned.

2 minutes later we all had our heads in our hands.     An innocuous back pass was made to Onur who dithered with the ball which was quickly taken from him by an alert Goztepe forward.    On he went unchallenged to fire in an unstoppable shot with Gokhan helpless.    There is no hiding place for Onur.    He wasn’t under pressure and he screwed up big time.   Lesson learned the hard way !

At this point I was thinking ......... that’s it.    There is no way Ankaragucu is going to stage a remarkable recovery.     Then, 10 minutes later the Hand of God appeared to give Ankaragucu a helping hand !!

From an Ankaragucu free kick on the left the ball was hoisted into the box and down went an Ankaragucu player in a ruck of players (couldn’t see who it was).    Whistle goes and the referee is pointing to the spot !    Hmmmm ....... I didn’t see a foul being commited, but I’m sure the action replay can shed some light on it.    Anyway, the referee’s decision is final and after the protests has been dealt with ........ and a RED card to Goztepe’s No6 ........ the penalty was despatched by Levent in fine style.

Still, with 20 minutes to go, Goztepe’s 10 men refused to settle for a draw and kept up their attacking.     We had deep intakes of breath a few times as the clock ran the game down, especially on their dangerous looking breakaways.

However, it was Ankaragucu who had the chance to win the match with the clock on 90 minutes, when Erdem was put through but his shot was just past the post.

It is difficult to criticise the players today because in all fairness they can’t be faulted for their effort.   However, the bottom line is that on the past few performances which we have witnessed  they can forget about promotion and just concentrate on consolidating their 2nd League statues.   Each match now till  the end of the season is going to be a ‘must-win’ match !

Off to the Chopin Bar for some much needed post-match refreshments !

Before closing, I must just mention that the referee must have been new to the Professional League.    He penalised Ankaragucu players 5 times for foul throw-ins and kept insisting on free kicks to be taken exactly where the infringement occurred.    At this level of footie he must learn to be a little bit flexible in order to keep the game flowing ! 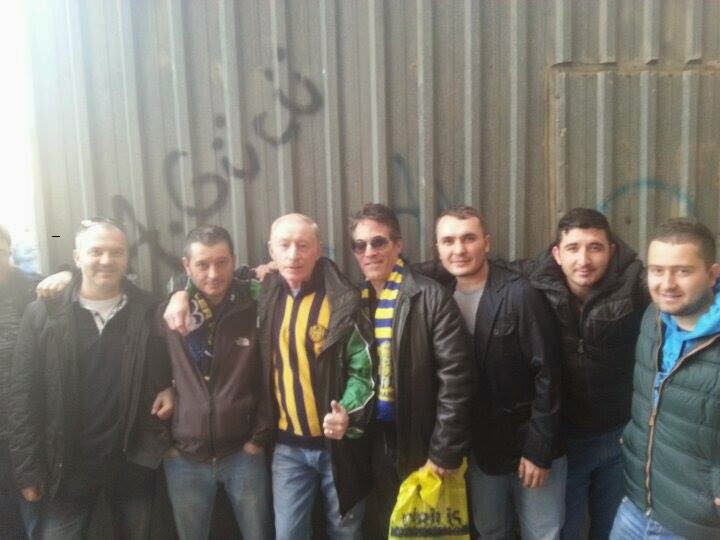