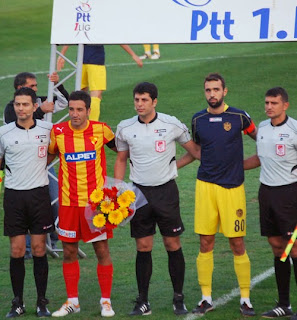 This weekends match between Ankaragucu vs Goztepe will be one of the biggest games in Turkey in terms of rivalry and passion. Both sets of fans have a history of violence and have made no secret of their hatred for each other. This all goes back to a Turkish Cup final in Izmir where Ankaragucu were playing Galatasaray. The Goztepe fans went to the match and supported Galatasaray while Karsiyaka fans supported Ankaragucu. The rest is as they say history.

Unfortunately for both clubs this game is in the 3rd tier of Turkish football and not in the Super lig amongst the elite clubs. In terms of history and fan base these are two clubs who should be at the top end of the Super Lig. However both clubs have suffered from miss management and dare i say corruption which cant be proved. Goztepe even had to start over again from the amateur leagues where they bought an amateur side and changed their name to Goztepe.

Ankaragucu look like they could be heading the same way, although Melih Gokcek seems to be eyeing up renaming Oslamlispor at Ankaragucu A.S which looks like to have been a master plan between him and Mehmet Yiginer. Something that Maniac Kanka Harun said all along.

Both teams go into the match on the back of disappointing defeats last weekend. Ankaragucu lost at home 1-0 against Kocaeli Birlikspor while Goztepe lost 2-0 at home to Pazarspor who also beat Ankaragucu the week before.

Goztepe however still sit in 3rd place in the league and look like they will be good enough to guarantee a playoff place this season. Ankargucu on the other hand are 3 points away from the playoff places but also 3 points off the relegation places.

Its time to stop giving this Ankargucu side a hard time and remember they are kids who don't get paid on time, don't have the best facilities and only have a couple of experienced players beside them. We as fans just need to be there at the stadium to support them and help them through this difficult period.

Keeping the club in this division will be a success for Mustafa Kaplan and what better way to start the weekend than a win over your biggest rivals. The last time the two sides met was 2 years ago at the 19 Mayis Stadium where both clubs were relegated from the PTT Lig. Ankargucu won the game 3-1 with goals from Enes Kubat and Teoman Erkan.

Enes Kubat will line up in a Goztepe strip this weekend after signing with them last season from Ankaragucu after turning down a new contract. A talented young forward he must be watched along with the leagues top scorer Timur Kosovali. The striker has been in excellent form this season but looks like he may miss the match due to injury which would be a huge boost for Ankargucu.

Mustafa Kaplan has a defensive crisis with both Serhat Gulpinar and Volkan Geyik both suspended. Also missing is Gurkan Alver, Cihan Bal and Metin Ilhan through injury.

Hasan Ayaroglu looks set to start the game with the coach losing patience with Gokhan Erdogan who has continued to flop this season. Umut Nayir and Gokhan Akkan will again be the key players for Anakaragucu with both players having impressive seasons so far. Levent Kale got off the scoresheet at the weekend from the penalty spot but still hasn't scored from open play.

The game will be played at the 19 Mayis Stadium in Ankara on Sunday at 1330. Anyone interested in joining the Kankas for the match get in touch with Jim and he will have the instructions.
By Nady - November 13, 2014