ANKARAGUCU LEAVE IT LATE BUT DELIVER THE 3 POINTS IN HONOUR OF NADEEM’S VISIT !! 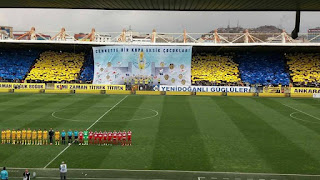 Ankaragucu moved 4 points clear at the top of the league after defeating Tuzla today, and Gumush.....spit....hane only managed to draw at home to Nigde. 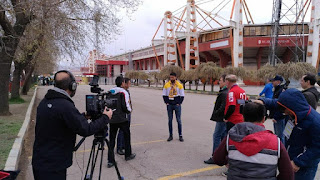 Nadeem being interviewed by TRT.

We were then interviewed outside the Stadium by TRT and this interview will be screened by TRT in August to commemorate the founding of Ankaragucu in August 2010.   Exact details of the screening date and time will be given here when known !

The Stadium was full again with only 5 lonely souls in the away end and the atmosphere was amazing.   The players were given a rousing welcome when they entered to start the match and Maraton put on a Blue and Yellow Show (similar to Gecikondu’s last week) for the National Anthem as can be seen in the photo above.

After all the pre-match hype, the first half was a bore as a footie spectacle.

Ankaragucu went straight into attack from the off, but it was Tuzla that almost caught Ankaragucu on the break in the 4th minute but Korcan saved bravely at a Tuzla forward’s feet when he was about to shoot and score.

The Bursa song was sung in the 16 minute as usual, but after that there was only 3 goal attempts by Ankaragucu before the half time whistle.

So, as I said, it was a poor first half and I was thinking at the interval that things could only get better.    Yes, they did, but not before we had some anxious nail biting moments !

There was a significant improvement in the urgency from the Ankaragucu players in the 2nd half as they laid siege to the Tuzla goal.   Muharrem should have scored 2 minutes into the re-start but he lost his footing when about to shoot in a good position.

9 minutes later Serkan should have scored when he worked his way cleverly into the box on the right but shot tamely at the goalkeeper.

Tuzla was looking dangerous on the break and they almost scored 3 minutes later but the shot on goal went narrowly past the post.    9 minutes later Enes should have scored when put clean through, but he shot straight at the goalkeeper.

I was contemplating yet another home draw with 7 minutes remaining when the unthinkable happened.   In another Tuzla breakaway, the long ball was played out to the unmarked No7 who brought the ball under control and shot to the near post.    At first I thought it was saved but apparently the ball squirmed in across the line before Korcan could recover.   We were all stunned into silence and disbelief !

2 minutes later we were all back up on our feet singing and shouting and high fiving !!!   A long clearance from Korcan was headed to Enes who brought the ball under control, saw the goalkeeper coming to meet him, and cleverly lobbed the ball over him and into the net for the equaliser.

At that point we were all agreed that we would settle for one point.   However, the players were of another mind !     The clock was on the 90th minute mark and a long ball was played out of defence which was collected by Kenan and he sent in a screamer of a shot from just inside the penalty box to put us all into euphoria.    We all went mental !!!

The players then did a lap of honour, followed by Coach Izmet Tasdemir and Chairman Mehmet Yigner.    Very few punters were leaving the Stadium at this point !

Off we went to Bira Park for some refreshments, but not tea and coffee this time !

So, the curtain came down on another successful visit by Nadeem and we all wish him a safe journey back to Scotland tomorrow. 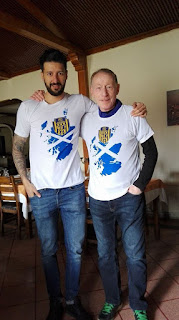 Next up is the tricky journey to Kastamonou next Friday when hopefully Harun will be doing the honours of reporting on that match.

Keep watching this space as Ankaragucu resume their task of winning this league and returning to the PTT Championship League next season.