Sundays match in Kayseri will go down as one of the most important in the history of Ankaragucu Spor Kulubu history. A chance of winning promotion back to the PTT Lig on its own is one met with excitement and relief from the Ankaragucu fans. The opportunity of winning the clubs first competitive trophy since 1981 makes the whole occasion more (in the words of the great Robin Williams) Spectacular.

The 1981 Ankaragucu Kupa Beyi team go down in folklore history having beaten Boluspor 2-1 to give the club what would turn out to be their last piece of Silverwear. Most Ankaragucu fans have been starved of seeing their team winning trophies and only the older fans will remember the Cup winning team in 81.

To this day not a week goes by where you don't see pictures of Adil Erinc and that famous dive into the crowd celebrating at full team with the fans. When a club is starved of success they cherish their trophies more so than some of footballs bigger clubs who just expect their team to win every season. 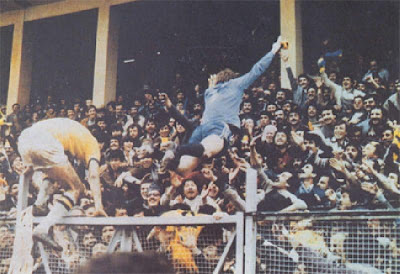 Winning the Turkish Cup that year meant a lot more for Ankaragucu than any of its previous winners.  President Kenan Evren and the Turkish football association decided that the winners of the Cup would also win automatic promotion to the Super Lig. Ankaragucu kept their place in the top tier right up until the finiancial problems back in 2011. For any Ankaragucu who hasn't seen some of the fantastic historical pictures of that day, you can see them here Ankaragucu vs Boluspor Kupa Beyi

The current Ankaragucu squad now have the opportunity to be remembered in years to come as playing a huge part in the clubs steps back to the Super Lig. In their way is bottom of the table Kayseri Erciyesspor who have only won 1 game all season while conceding over 100 goals. That said, no match in football is a given and the team will need to treat this match like Kayseri are in 2nd place. Any complacency or thinking they just have to turn up would be a huge mistake and anything less than a win will see the full wrath of the Ankaragucu faithful.

The club have agreed with Kayseri Erciyesspor that the game will take place at the 32,000 seated stadium Kadir Has. Due to finances and low crowds this season, Kayseri have been playing some of their games at a small local park next to the stadium. The Ankaragucu board have also asked for 20,000 tickets for the match with huge demand from the Ankaragucu fans. A decision will be made later this week.

It looks like Ismet Tasdemir will have a full squad to chose from and the fans will be hoping for a more positive performance. The last two games the team have been very poor in the first half and haven't created enough chances. Players like Emre Sahin and Erhan Senturk have failed to impress despite given numerous opportunities. Enes Kubat must surely be in contention for a place in the starting line up. He has impressed every time he has come on with his pace, work rate and even scored and important goal against Tuzlaspor.

The Kanka Group will again have members travelling to Kayseri. So far we have Harun, Horseman, John M, John A, Ahmet, and Tansu all going. Others are looking to see if they can get a holiday from work. If anyone else is interested in going please get in touch. Otherwise enjoy the match like myself on a Bursa TV and let's cheer the Sari Lacivert onto the title!!