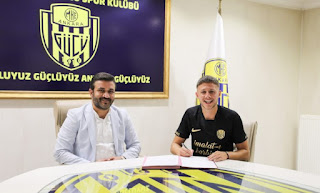 Ankaragucu have completed this signing of Idriz Voca on a 2 year contract with the option of another year at the end. The 23 year old Kosovan flew to Ankara on Monday night for talks and a medical which have turned out positive for both sides.

Voca is a physical defensive midfielder with an excellent range of passing and signs from Luzern in the Swiss Premier League. Ankaragucu see Voca as a major coup for the club as both Werder Bremen and Galatasaray were said to be interested in signing the player too.

Voca said he was delighted to sign with Ankaragucu and is looking forward to giving his all for the Yellow and Blue jersey. President Fatih Mert will now push on with the signing of a Striker which should complete the clubs transfer business and should set the club up nicely for the season ahead.