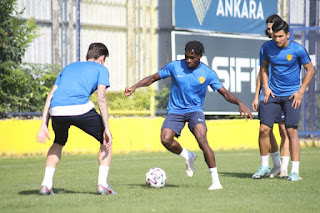 After a weeks break Ankaragucu are back in action this Sunday as they travel to Sivasspor in the Turkish Super Lig. Both teams are in a period of transition as is so often the case in Turkish football with huge turnover in staff each season. The transition is more of a positive for Ankaragucu who avoided relegation last season only due to the no relegation decision by the Turkish FA. Sivas on the other hand finished 4th although were still disappointed as they were leading the table at one point before a poor second half of the season.

I read a statistic yesterday from Ahmet Sulak on twitter who said Ankaragucu have never beaten Sivasspor away from home in the Turkish Super Lig. Quite a statistic and hopefully one the team can put right on Sunday.

Ankaragucu started the campaign with a 2-1 defeat at home against newly promoted Erzerumspor. A result that disappointed the fans and management. Ilhan Parlak paid the price and his contract was terminated and he signed with Kayserispor a couple of days later. Fuat Capa also came in for some criticism for his tactical decisions and team selections. There will be no excuses on Sunday as the coach has a full team to chose from and a host of new signings who have all received their licence.

Goalkeeper should see the return of Freidrich in goal. The Brazilian was missing for the last game and his place in the team taken by Korcan who had a very poor game and should have no place in the starting line up.

In defence Kitsiou will take the right back position and again will be a key player for the club this season. He has constantly put in excellent performances and is also a leader on the park. Atilla Turan should play at left back. Thiago Pinto has been very disappointing of late and doesnt seem up to a physical battle. I would like to see Pazdan and Sarlija as the centre back pairing but have a feeling Fuat Capa will stick with Kulusic who has been very disappointing since January.

The team now has a lot of options in midfield with the signings of Assane, Potuk, Voca, Atakan and Sahverdi. I think we will see Lukasik start this weeks game and one of Assane or Voca joining him in the middle of the park until the new signings find match sharpness. Alper Potuk will likely take that 3rd spot in a more advanced attacking role.

Jonathan Paintsil and Adzic will likely take the wide forward positions and Bolingi will play through the middle.

The team is shaping up well with the new signings. Fatih Mert confirmed 2 more signings will join the club in the next week. One will be a striker, and the other an attacking midfielder. It will take a couple of weeks for the team to gel but im looking forward to seeing the new signings and what they can bring to the team.

Sivas have won 1 and lost 1 of their opening 2 games. A 2-0 defeat at home against Alanyaspor and a 2-1 win at Erzerumspor last weekend. Having lost key players such as Mert Hakan Yandas, Emre Kilinc and Fatih Aksoy who has returned to Besiktas after a loan spell, it will be difficult for Sivasspor to reach the heights of last season. Loosing Mert and Emre in particular on free transfers is part of the problem with Turkish football. So many clubs loosing key players for nothing.

They have made some additions with Ola Kayode, Max Gradel and Faycel Fajr in particular good players who should do well in the Super Lig. Kayode had a loan spell at Gaziantep last season and had a mixed experience due to disciplinary problems, but scored 10 goals and will look to build on that this season.

Sunday will be a difficult match for Ankaragucu but they must take at least a point and hit the ground running. Lets hope we have a positive outcome for the match report on Sunday night!