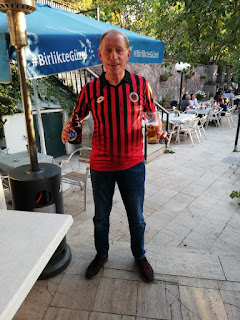 Two new Coaches in the dug-outs today.    For Gencler, ex-Gencler striker Mert Nobre, and for Konya, Ismail Kartal, who’s a well known figure in Turkish footie over the past years.

It took about 30 minutes into the match for me to write anything worthwhile with Konya finding lots of space to sweep the ball around the midfield area, but no sparks in the final third.     Gencler was playing a holding game and hanging on, probably thankful for Konya’s dithering.

Sio was lucky not to get a yellow card for a dig into the ribs of a Konya player on the referee’s blind side, and Stancu on his own up front was anonymous.    I don’t understand why teams who play at home (or away) only have a lone striker !!!

Konya came close to making the break through before half time when a perfectly flighted free kick on the right to the back post was met with a bulleted header which hit the bar and went out of play.

Gencler started to come more into the match and had a few chances shortly after the re-start.   First, Candeias had a long run down the left, but his shot was past the post with only Stancu up in support but ignored by Candeias.

Soon after, there was some nice inter-play by Gencler down the right and the cut-back was sent to Stancu who shot narrowly past the post.      Stancu had another chance moments later but when well placed in the box, blasted his shot against a defender.

Konya also had chances, but not for the first time their shooting was high and wide.

With 15 minutes to go, Konya began to run out of ideas allowing Gencler to take control of the match, but Konya seemed happy to soak up the pressure and hold out for one point as the clock ran the match down.

Motta did have a chance almost on the final whistle but the Konya goalkeeper stuck his right foot out to save his goal bound shot.

I hesitate to be overly critical of both teams so early in the season, and after all, it was Konya’s first match.    However, let’s hope things can only get better for both teams.    Most of the action was in midfield with very few genuine attempts at goal, and both goalkeepers were never really sorely tested.    In fact, both teams had only one shot each on target in the entire match  !!

Next weekend is Gencler’s turn to have a free week, so their next match is away to Beshiktrash on Sunday 4 October.    As I’ve said many times, it doesn’t get any easier in this league   !!