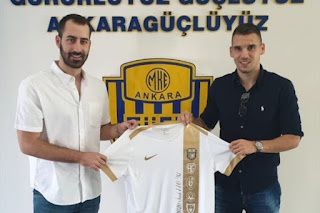 Ankaragucu have completed their first signing of the Summer with Croatian centre back Zvonimir Sarlija signing for 350K from Slaven Belupo. Fuat Capa knows the defender well from his time at Kasimpasa having signed him last season. Sarlija only played 6 games scoring 1 goal due to injury, but that hasn't put off Capa who brings the 23 year old in to provide competition for Pazdan and Kulusic.

The signing of Sarlija is set to be the first of many over the next couple of days for Ankaragucu after Fatih Mert announced on his twitter this morning that the transfer ban is almost over an the new players will be playing on Sunday.

We will have the match preview of the match with Erzerumspor here on Friday as we are trying to hold off until the new players have signed which will give us a clearer picture for the opener on Sunday.