The derby goes to Gencler

The sun was shining and was good in the world as the Kankas filed into the Beer Bus. There were way to many people to mention but let's just say that us Gencler lot comprised solely of Dan the Man, myself and Little Oz Kanka. Having to get tickets, the poor old Ankaragucu lot had to leave a good half hour before we did. Even then we had time to go have another beer at the TSYD Lokal next to the stadium where we found Oguz.

Enjoying the beer a few minutes before kick-off and we noticed that Gencler Chairman Ilhan Cavcav was sitting at the next table. Never one to allow my principles to get in the way of anything I got my photo taken with the man. Little Oz Kanka refused to be photographed - a stance that was later much appreciated by various Gencler supporters who have been calling on Cavcav to resign for the past five years. 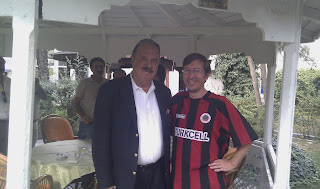 The photo that brought good luck to Cavcav and therefore to Gencler.

Got to our seats, well... the top of Maraton where we were standing, just in time for the national anthem.

First 20 minutes or so were a bit boring with neither team really getting out of first gear. I don't think there was a single shot on goal from either side but Ankaragucu were probably in a more attacking mood. Things changed a bit and Gencler started attacking. Aussie Jedinak had a shot saved by the Ankaragucu keeper in the 25th or so and Smeltz was unable to convert a good chance after the ball hit the post. Still, not much happening, except for poor old Gencler keeper Serdar who had to leave the stadium in an ambulance after a collision with Meye who was shown a yellow card for his troubles.

Then came the fun when Serkan was taken down in the box and the ref pointed to the spot. It looked pretty clear to me but I've yet to see any replays. Shane Smetlz stepped up and scored the first ever goal by Kiwi in the Turkish Super Lig. An historic day!

One up at half-time and all was good with the world.

Second half and Ankaragucu attempted a fight back only to be rumbled time and again by Ante Kulusic and Aykut Demir at the back. This was text book defending and both players and great stuff to watch.

The Ankaragucu fans started to get a pissed off by now and the first cries of "Umut istifa" started up. Not long later it was "Yonetim istifa" and then went up the cry of "satilik degiliz ankaragucluyuz", the last one getting a warm applause from the Gencler fans.

There were quite a few Ankaragucu fans in the Gencler section, including Kaleci Kanka Tansu but as always there were no problems.

At one stage Tansu noted that there seemed to be some foreigners in the stand (as we were above them the only evidence he had was the colour of their hair on the back of their heads). I went and annoyed them and it turns out they were students at Bilkent University. So the Bilkent teachers were in the Ankaragucu stand and the students with us.

Match over and a good victory for Gencler. It wasn't brilliant but it probably saved Gencler coach Thomas Doll's job.

Back to the Beer Bus where the students and the teachers met up. More beers and in honour of Dave and Carol who were in town for the weekend we all decided to support West Bromich Albion who were playing away to Arsenal. The Alkaralar table also decided to support them and a surprise victory for Albion topped off a great day.
By Oz Kanka - September 26, 2010