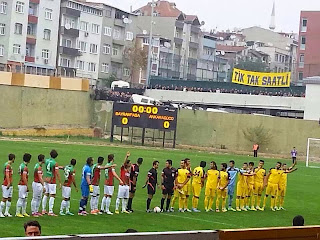 Ankaragucu surprisingly lost 1-0 in Istanbul this afternoon against struggling Bayrampasa. A disappointing result for the club especially as Bayrampasa had only won 1 game all season before today. The lead at the top is now cut to 2 points after Alanyaspor won 4-0 at home to Bozuyukspor and now leapfrog Bandirmaspor into second place. Bandirma lost 3-0 at Nazilli which just shows anyone can beat anyone in this league.

The main talking point tonight is the future of Ankaragucu coach Hayati Soldas, now its easy to say Ankaragucu are top of the league so why are the fans questioning the manager ? First of all if Ankaragucu are to win this league they need to start taking points of the teams at the bottom of the table. The two defeats this season have came against Istanbul Gungorenspor and Bayrampasa who are two of the weakest sides in the league. Secondly Hayati bey has had the largest budget of all the teams in this league, he can call on the likes of Aydin Toscali, Mehmet Cakir, Serhat Gulpinar and Selim Teber who were all Super Lig players not long ago.

Today Hayati again dropped Mert Erdogan from the team in place of Harun Aydin. Mert may split opinions with the Ankaragucu fans but there is no doubting his quality and to drop him the player taking his place must be of a higher standard, unfortunately at the moment that is not the case with Harun. Young Emre Tasdemir in the last two matches has scored 2 goals and shown what a fantastic talent he is, yet today he was on the bench and played no part. Captain Aydin Toscali was back on the bench as Hayati stuck with Gurkan and Volkan who have looked very shaky at the back this season.

Bayrampasa scored after only 9 minutes today thanks to Gokhan Kilinc, and that was the way the score finished. Going by the updates on facebook and twitter it was a poor performance from Ankaragucu. Next up is a home match with Tepecikspor who are another of the sides struggling at the foot of the table. Its a must win for Ankaragucu with Alanyaspor starting to show some form.