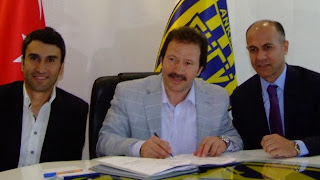 Unfortunately this weeks preview isn't just about the problems on the field as we have some important news about developments off field to discuss. First though we will look ahead to the weekends must win match at Bozuyukspor. After another disappointing defeat at home last week against Alanyaspor, the visitors Ankaragucu know they must win against Bozuyukspor who are lying in the relegation zone.

Bozuyukspor have only won 2 games all season but that will count for nothing as like every other team they will be looking to cause an upset against the big boys. They narrowly lost 2-1 against Altay last week and will be no pushover. Ankaragucu need to get back to winning as they face the unthinkable of moving outside the playoff places if other results also go against them.

Its difficult to pinpoint where it has all gone wrong for Ankaragucu in the last month, the injuries of Mehmet Cakir and Umut Nayir have been a blow to the club, but its at the back where the real problems lie. Volkan Geyik, Aydin Toscali, Gurkan Alver and Aytac Oden have all been performing below the standards they are capable of. Captain Aydin has struggled since he has come into the starting line up, the goals conceded last week he was to blame for 2 of them down to lack of concentration and a moment of madness.

Its something that Fuat Aykuz needs to address on the training ground, the club can't keep losing goals like they have been and expect to win promotion to the PTT Lig. In January i expect the club to bring in some quality defenders. The midfield will also need to take some responsibility and perform better than they have shown. Selim Teber and Serhat Gulpinar are arguably the best two central midfielders in the league. If you add Mehmet Cakir, Hasan Ayaroglu and Emre Tasdemir to that the manager has a wealth of talent to chose form that other managers could only dream of.

Now to the problems off field. President Mehmet Yiginer made an announcement on Tuesday night which has created some concerns amongst the report. Its been reported that a group of Ankaragucu fans visited Bestepe the clubs training facilities to speak to the played and staff regarding the performances, things got heated. President Yiginer has now stated that he doesn't want to be involved in anything that will damage the name of Ankara and has called a General Assembly for January where its believed he will step down as chairman.

Rumours on Facebook and twitter that If Yiginer goes it will be someone close to Gokcek who takes over at the club. The dark days look like they could be set to return.
By Nady - November 28, 2013