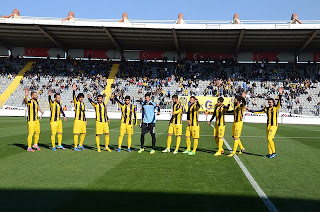 Ankaragucu travel to the province of Trabzon on Sunday as they come up against Ofspor in what will be a tough match. The club will be hoping be hoping to put an end to the 3 match losing streak which has saw them drop to 3rd in the League. The last two games have not only ben disappointing in terms of the result, but also the performance. Ankaragucu for the last couple of years have been known for playing good football despite the poor results. New coach Hayati Soldas has come under huge pressure as the style of football and negative tactics is leaving the fans calling for his dismissal.

Losing at home to Tepecikspor last weekend was a blow to the clubs title hopes, but it is up to them to come back stronger and prove they are capable of winning this league. As results have shown anyone is capable of beating anyone in this division. Although Ankaragucu are missing key players Selim Teber, Orhan Evci and Umut Nayir they still have a big enough squad to win these games. With Altinordu and Alanyaspor both on a winning run it is important that Ankaragucu don't lose ground on the top 2.

It seems that the Manager Hayati Soldas is still with the club after reports last week claiming he had resigned. It will be interesting to see how he lines the team up against Ofspor and if he has listened to the fans shouts for Attacking positive football. The decision to play Gurkan Alver in midfield last weekend instead of Mert Erdogan was an example of these negative tactics. Mert an accomplished midfielder who played for the club in the Super Lig, while Gurkan is a no nonsense centre half who is known for not being good on the ball. Added to that Gurkan was playing in the middle of the park with Serhat Gulpinar who is also a defensive midfielder. Then we have the decision to drop our on form striker Levent Kale for the unfit Ibrahim Sahin ??

Ofspor are sitting just outside the playoff places and drew 2-2 at Altay last weekend, they also beat Alanyaspor 1-0 a couple of weeks ago and have shown they are a difficult side to beat. Ankaragucu still have enough quality to go and win this game. They need to be tight at the back, as the two goals last week conceded were goals you would expect to see at Junior football level. Youngsters Hasan and Emre are two of the most promising young players outside the Super Lig, they have to start making the right decisions though and stay involved in the game.

Kick off will be at 1330 on Sunday and the game will be live online through a Trabzon TV Chanel. Im prediction a 1-1 draw, i hope we can get the 3 points buy i just dont see the manager changing his decisions or tactics.
By Nady - November 13, 2013