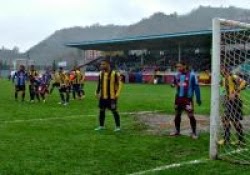 Ankaragucu are in great danger of throwing their title hopes away after yet another match without a win.  A 1-1 draw at Ofspor now makes it 4 matches in all competitions without a win. In fact the last match Ankaragucu won was when i was there for the 5-0 win over Pazarspor. Who would have thought that day that Hayati Soldas would be gone as coach and Ankaragucu would be 5 points behind Alanyaspor within the next 3 league games ?

New coach Fuat Aykiz brought Levent Kale back into the starting line up alongside Onur Atasayer, but it wasn't enough as Ankaragucu couldn't hold onto a 1-0 lead to take 3 points against Ofspor. The first half ended 0-0 with no real updates due to Kardinga TV not being able to show the game due to technical problems.

Into the second half and Ankaragucu took the lead through an own goal from Abdurrahman Cubukcu on the 62 minute mark. It looked like Ankaragucu were heading for the win but for a late equaliser from Mertcan Aktas and put a dent on Ankaragucu's title dreams.

Alanyaspor won 3-0 at home against Altay to go 5 points clear at the top, they are now showing they are real title contenders and will now travel to Ankara next Sunday for the match against Ankaragucu. A defeat for Ankaragucu will all but kill off their title hopes as early as November.

Fuat Aykuz will now go back to the drawing board and see how he can improve the defence while the team look to get back to scoring goals. The injury of Umut Nayir and fitness of Mehmet Cakir has took some sting out of the Ankaragucu team, but they need to get back to winning ways.
By Nady - November 17, 2013