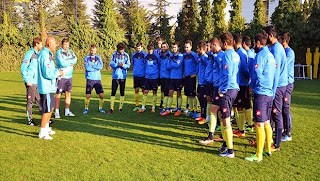 Fuat Aykuz was happy with the way the team played last week at Ofspor and claimed the team were unlucky not to win the game after the Ofspor goal was said to be offside. Ankaragucu will need to up their game and get back to winning. With manager Hayati Soldas gone after the fans calling for his resignation, there are no more excuses. Despite the team being young, they have played together for a long time. The teams they are coming up against are of a poor standard, and if Ankaragucu want to be taken seriously they need to start showing the kind of form that the leaders Alanyaspor are showing.

The biggest concern is the defence, week after week the goals the team concede are what you would expect to see at amateur level. That is something that the manager will need to address in training. The last time Alanyaspor lost in the league was at Ofspor who beat them 1-0. Ankaragucu have the quality to win this match, and with the home support behind them they need to win this match for the fans.

The match will kick off at 1330 on Sunday at the 19 Mayis stadium. For those who can't make the match the game will be shown live on Baskent TV. Its difficult to predict a result with Ankaragucu at the moment but they will need to show a huge improvement if they are to win this match.