ANKARAGUCU SUCCUMB AT THE DEATH ! 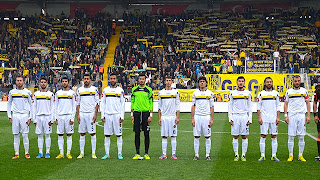 I took my customary stroll through Genclik Park on my way to the Stadium to have a nostalgic look at the old (now defunct) Sahil Restaurant where we used to meet, and I may add …. full of high spirits and optimism. However, that optimism was short lived 3 hours later !!

I entered the Stadium at 1pm to find Gecikondu full and Maraton almost full. By kick-off time, Maraton was full and so was both Kapali sections. A truly fantastic crowd for a 2nd Division Match.

A nice touch just before KO when the 50 odd Alanya supporters in the Away End unfurled an Ankaragucu Banner much to the delight of all sections, and they were applauded of course.

I was joined by Battle Damaged Kanka Damon, Cider Kanka John, and Apple Kanka Erman together with his two friends.

Ankaragucu took to the field wearing an all white strip which had two thin strips of blue and yellow across the chest. Were they going to play like Real Madrid I was thinking ??? And the answer is …....... NO !!

Normally it is Ankaragucu coming out of the traps first, but Alanya showed from the off that they are not top of the league without good reason. Ankaragucu came into the match in fits and starts but it was Alanya showing the most urgency and fluency.

It must have been a great match for the neutrals sitting in the VIP Section, but for us long suffering Ankaragucu supporters it was frustrating to watch Ankaragucu's attacks coming to nothing in the final third.

20 minutes in and Alanya should have opened the scoring with a fast counter attack, the cut-back, but thankfully no takers.

Approaching half time and Alanya was putting Ankaragucu under extreme pressure and the defence was in panic mode as they cleared two Alanya scoring opportunities. Ankaragucu on the counter should have punished Alanya, but with the attacking move made quickly, it was halted by indecision and the chance was lost.

The inevitable goal came just before the half time whistle when Alanya broke out quickly down the right wing and when the ball was cut back in the 'classic cut back style' it was tapped in for what was really all that Alanya deserved from their first half performance.

Into the 2nd half then and Alanya took off from where they left off, ie, on the offensive. Ankaragucu was trying to get back into the match, but even with the introduction of Mehmet Cakir, the match was becoming scrappy.

Halfway through the 2nd half, and just as I was beginning to think that Alanya might start running the match down, then Ankaragucu finally made the break through.

A corner on the left, the knock-down in the box, and there was Serhat to rifle a shot into the net with the goalkeeper rooted to the spot.

Celebrations all round and everyone jumping up and down ready for the Ankaragucu onslaught...... wrong !

From the re-start Alanya went straight into attack and scored …....... aaaaaargh !!!! I was still celebrating the Ankaragucu goal and didn't see it, but Cider Kanka said it was a classic schoolboy error with the defence caught off guard. Probably they were still celebrating like me !!!

Ankaragucu finally woke up and started to play with some urgency, although I have to say that Alanya were always looking dangerous on the break.

Ten minutes to go and finally a break for Ankaragucu when Emre went down in the box under a challenge and a definite penalty. Levent made no mistake.

Approaching the final whistle and we were still willing Ankaragucu on to seal a memorable win because a 2-2 score is not what we were looking for.

Then in the last attack of the match, an Alanya player went down in the box on the left (theatrically in my view, albeit that it was quite far away) and the referee unbelievably pointed to the spot.

Stunned silence all round, but the Alanya No9 made no mistake.

Gutted is not the word I would use. Perhaps something stronger which I can't say here !!!

Ankaragucu is now left with a mountain to climb if they are to escape from the Red League. Hopefully they won't come up against teams like Alanya in the run up to the end, and all we can do now is realistically think about making the Play-Offs !!!

Off we went to The Chopin to team up with Oz Kanka Chris who was also suffering the defeat of Genclerbirligi at the hands of Erciyes. His report will not make good reading either !!!

All the best from a very disappointed Eski Kanka Jim

PS ….. me thinks it's going to be a long and effin frustrating winter !!!