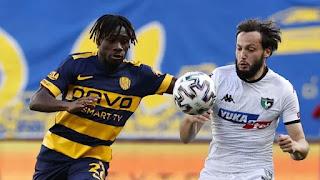 A disappointing result and performance from Ankaragucu today who lacked the intensity and energy they have shown in recent weeks while wasteful in front of goal.

Ankaragucu started the game with no recognised striker again with both Borven and Badji ruled out due to injury. Emre Gural and Geraldo were both disappointing and lack the quality and fitness to start games.

It was Denizlispor who started the brighter and they took an early lead through Hugo Rodallega who was a constant threat throughout the match. Kulusic fouled his man on the edge of the box and he referee awarded a free kick. Up stepped the Colombian to curl the ball brilliantly into the top corner giving Korcan no chance.

Ankaragucu were struggling to create any open chances but were coming back into the game. Kitsiou again was involved in most of the attacking play. His first chance was a shot from 25 yards which Abdulkadir made a good save.

Alper Potuk had another good game and on the 36th minute picked out Kitsiou unmarked at the back post who volleyed past Abdulkadir to make it 1-1.

Denizlispor had a chance just before half time as Tusha was through on goal but shot straight at Korcan.

Into the second half and it was much of the same with Ankaragucu lacking energy and giving the ball away to cheaply.

Joseph Paintsil deservedly earned the plaudits for his excellent performance against Besiktas last week. But today he was back to his old self of being selfish. He beat his man with a nice bit of skill and had Emre unmarked in the box with only the Keeper to beat, but Paintsil decided to try and score from a tight angle and his shot went wide. Really poor play from Paintsil.

Sagal and Rodallega both had chances go wide for Denizlispor before Endri saw his free kick saved by Abdulkadir. From the resulting corner Abdulkadir spilled the ball to Alper who saw his shot hit the post and go wide.

Sahverdi had a good effort just before full time but Abdulkadir again made a great save as he gave Denizlispor a share of the points and a 1-1 draw to end the match.

Its difficult to be to critical of todays result, but this was a missed opportunity for Ankaragucu and they will now travel to fellow relegation candidates Yeni Malatyaspor on Sunday knowing they must win. Erzurumspor beat Malatyaspor today as things get really tight at the bottom.

It looks like Atakan wont play for Ankaragucu again as if he plays 1 more game his contract is extended by 1 year. With interest from Fenerbahce it looks like he doesnt want that to happen and Ankaragucu will lose him for a small fee at the end of the season.