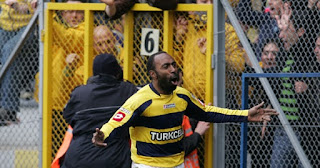 The Ankara Derby has been historically a different type of Derby to most others across the Football world. Derby day tends to start on the Monday at work where colleagues of rival teams will start to discuss the coming weekends match between two bitter rivals. For 90 minutes those friends and colleagues on opposing sides become the enemy. Hostile atmospheres, pyro displays and violence are all usually on show.

In Turkey we have Fenerbahce vs Galatasaray, Goztepe vs Izmir, the Adana Derby and a few others that reach those levels of intensity and hatred. Across Europe you have Rangers vs Celtic, Red Star Belgrade, vs Partizan, Dortmund vs Schalke and in South America there is the famous Boca vs River, Newells vs Rosario Central and finally in Africa you have the Cairo and Casablanca Derby's.

When Ankaragucu and Genclerbirlig meet its more about bragging rights than any of the above. The Derby still means a lot to the fans of two struggling sides but you don't tend to get the violence or heated atmosphere to most other Derby matches.

This Sunday will the stakes are even higher with both clubs fighting against relegation to Lig 1 this is arguably one of the biggest Ankara Derby's in history. There will be no fans at the match due to Covid restrictions but the fans of both sides will be cheering on every move from their homes hoping that their team deliver the 3 points.

Back in February both Ankaragucu and Gencler were almost certainties to be relegated as they were rooted to the bottom of the table. Fast forward to April and we have two in form sides looking to fight their way out of the relegation zone. Ankaragucu have managed that but its still too close for comfort.

Another good result on Wednesday against Konyaspor puts Ankaragucu in a good position going into Sundays game and Hikmet Karaman will have a tough decision with his starting line up. Zvonomir Sarlija replaced the suspended Pazdan and played very well so it will be interesting to see who partners Kulusic in the starting line up.

Aliou Badji got himself on the scoresheet and both him and Borven worked their socks off for the team. Borven isn't as effective playing out wide but his work rate is invaluable and will likely start in that position again. That leaves the final attacking position down to Geraldo, Saba or Paintsil. They have all played their part but suffer from inconsistency, but i believe Karaman will go with Saba who has the most amount of assists and goals for the team in that position over the season.

Alper Potuk has shown why Ankaragucu were so keen to sign him in the summer with excellent performances under Hikmet Karaman. He looks fitter and like he enjoys playing football again. He will again be key to any positive outcome for Ankaragucu on Sunday with his attacking runs and creativity form midfield.

When Ibrahim Akdag signed for Ankaragucu there were a lot of raised eyebrows, and his first month we saw a lot of indiscipline and stupid yellow cards. Since Karaman has come in he has played a vital role for the team. Ibrahim does all the dirty work, tackling, tracking back, covers every blade of grass which allows Alper and Endri to go forward and create.

Gencler have won 3 out of their last 4 games including impressive wins against Fenerbahce and Alanyaspor. Under former Ankaragucu coach Ozcan Bizati they have seen a bit of a resurgence and will be looking to carry that into Sundays match.

Sefa Yilmaz and Daniel Candeias will be important players for Gencler on Sunday as they both have the quality to punish Ankaragucu in the wide areas. Candeias is also very hard working and will chase back to help his team on defence. Sefa has scored a few good goals of late and cant be given any space near the box to shoot.

That said if Ankaragucu turn up and play to their best there is nothing to fear on Sunday. Gencler although on a good run are a poor side and the 3 points will go a long way to survival for Ankaragucu.

It was 1-1 in December the last time the two sides met but Ankaragucu will have to play at a lot higher standard than that day if they do want to take all 3 points. Haydi Baskent!!!