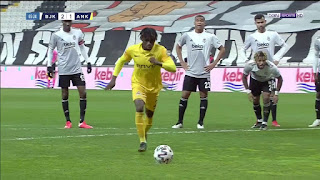 I've been an Ankaragucu supporter for 11 years and the last 30 minutes of tonight's match is up there with the best performances I've seen from an Ankaragucu team in terms of the football they played and sheer determination to take something from the game.

Ankaragucu faced an uphill task right from kick off as Borven, Saba and Endri were all ruled out with injuries and suspension. Hikmet Karaman decided to go for an attacking formation as he said he felt Ankaragucu could score more than 1 goal in the match after watching their game with Erzurumspor. He was correct!

The team got off to the worst possible start as Besiktas were awarded a penalty in the 1st minute of the match. Ankaragucu were too open and Badji made a clumsy challenge on Ozyakup who went down easily. The referee checked VAR and then pointed to the spot. Up stepped Nkoudou but Korcan guessed the right way and made a good save.

Besiktas dominated possession in the first half but Ankaragucu looked dangerous on the counter attack and the final ball let them down on too many occasions. It looked like we were heading into the break even until Besiktas took the lead 4 minutes into added on time. A soft free kick was awarded and Gezzall put in a lovely cross which Kulusic headed into his own net. The goal should have been ruled out as the replay showed Vida elbowed Sarlija in the face but there was no VAR check.

Five minutes into the second half and it looked like game over with another Kulusic own goal, this time from another good cross from the impressive Rosier. Two great headers from Kulusic but unfortunately at the wrong end of the pitch.

From the minute the 2nd goal went in, Ankaragucu were a different team. There passing was much better, they closed every ball down and made it difficult for Besiktas to retain possession.

Idriz Voca had an effort just inside of the box go flying over the bar when he should have done better. And then a minute later Ibrahim saw his shot blocked at the last second and deflected just over.

A couple of minutes later Ankaragucu pulled 1 back. A lovely ball from Pinto sent Paintsil through and he beat Rosier before taking on Welinton who brought the Ghanaian down in the box and the referee pointed to the spot. Up stepped Paintsil confidently to make it 2-1 and put Ankaragucu back in the game.

Then came the move of the match involving Pinto, Voca and Orkan who set up Emre Gural but he shout straight at Ersin. A beautiful move from Ankaragucu who were attacking at every opportunity.

The goal finally came when Ibrahim played a lovely ball through for Paintsil who was brought down in the area by Tore and the referee again pointed to the stop. Paintsil again stepped up confidently and sent Ersin the wrong way making it 2-2 and deserved share of the points for Ankaragucu in the last minute of the game.

A truly remarkable performance and result for Ankaragucu when you take everything into account. Hikmet Karaman is putting himself in the hat for Manager of the Year!!

Next up is Denizlispor next Wednesday in what will be another huge game against another team fighting for survival in the Turkish Super Lig!