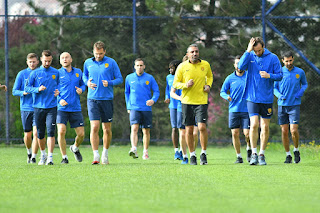 Firstly we would like to send our Heartfelt condolences to the family of young Ankaragucu fan Berat Ali who sadly passed away at Gazi University Hospital. It really puts everything else into perspective.

Ankaragucu host Gaziantep on Thursday night looking to bounce back after 2 disappointing results against Denizlispor and Yeni Malatyaspor. Anyone who has followed Ankaragucu will know that when the good times are here, the bad times are only just around the corner.

The last couple of performances have been disappointing, especially coming against fellow relegation rivals. But the club have now come under scrutiny due to alleged unpaid wages of players for the last 5 months. We have spoken about this so many times over the years with Ankaragucu, but there seems to be this attitude in Turkey, where clubs buy players knowing fine well they cant afford to pay their salaries every week.

We have saw this happening with most clubs in Turkey, even some of the Istanbul teams. Eventually the reputation catches up with you and foreign players don't want to sign for clubs who have a history of not paying salaries.

The good news for Ankaragucu is that Zvonimir Sarlija will return to the team after suspension and likely partner Ante Kulusic. Michal Pazdan had his opportunity to impress and win his place back at the weekend, but his horror show for the 2nd goal will seal his place on the bench at best.

The bad news is Joseph Paintsil and his indiscipline has caught up with him again as he is suspended while Geraldo is also suspended due to his reckless sending off. Torgeir Borven, Aliou Badji and Atakan Cankaya are all likely to miss out as they still haven't joined in full time training.

Losing both Borven and Badji has been the main factor in the poor form of late as having no recognised striker in attack has sadly shown. It can only be hoped that Hikmet Karaman gives Embiya Ayyildiz his opportunity on Thursday night. The young striker has looked lively when coming on and has a good goal scoring record in the Turkish lower leagues.

The midfield trio of Ibrahim, Alper and Endri has looked impressive under Karaman but that was disrupted at the weekend with Endri moving further forward and Voca coming in. Voca failed to impress and it should see Endri moving back into midfield. The other option is to play Endri out wide due to Geraldo and Paintsil being out and bring Lukasik into the midfield.

His biggest task will be who to play in attack. Maybe a change of formation to a 4-4-1-1? We can take a look below at a possible line up. The other concern is the form of both Goalkeepers. If Ankaragucu are to stay in the Super Lig, signing a good Goalkeeper in the summer must be a priority as neither Korcan or Freidrich are good enough.

Thursdays opponents Gaziantep have had a good season and still playing for a Europa League place. Fellow strugglers Erzurumspor did however beat them 3-2 at the weekend and must give Ankaragucu some encouragement.

Papy Djilobodji will again be the dangerman at set pieces as the towering defender knows where the back of the net is especially from corners. Alexandru Maxim is one of the best players in the Super Lig outside of the Istanbul sides, while Muhammet Demir is also a good player who will need to be marked closely in attack. Former Ankaragucu winger Kenan Ozer is part of the Gaziantep side and on his day is a goal threat.

Gaziantep won 2-0 the last time both sides met, so Ankaragucu will be hoping to even the scores this time around. Ankaragucu can also take some encouragement that Gaziantep have lost 3 and drew 1 of their last 4 games.

GK - Korcan - I would personally like to see Mert Topuz given his opportunity but Karaman will likely go with experience.

RB - Kitsiou - Has been the teams best performer the last couple of months, will be disappointed in the result at the weekend and will look to drive the team on.

CB - Sarlija - Has earned his place as the teams most important Centre back with his performances and was missed at the weekend.

CB - Kulusic - Likely to be given the nod over Pazdan and Erdi.

CM - Ibrahim - Ideally needs a rest as he covers so much ground, but not many options on the bench especially with Atakan out.

CAM - Alper - Along with Kitsou has been a key player for the club and will be instrumental in keeping Ankaragucu in this league. Need another big performance on Thursday.

CM - Lukasik - Voca failed to grab his chance which could see Lukasik return to the team. If he can perform to the level we know he is capable of he could be an important player between now and the end of the season.

LW - Endri - Would rather he played in midfield, but he is the only other creative player capable of playing in a wide position.

RW - Saba - Quite simply, we need Saba to turn up and take any opportunities that comes his way instead of passing straight to the Goalkeeper.

CF - Embiya - Only recognises striker in the team. The 2o year old could be in line to make his full debut.