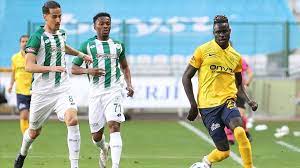 Ankaragucu took a share of the points in Konya yesterday with another good performance and 1-1 draw against an in form Konyaspor side. Aliou Badji repaid the faith shown by Hikmet Karaman by scoring the opening goal and delivering an all round impressive performance.

Hikemt Karaman made a few changes with Sarlija coming in for the suspended Pazdan, while both Badji and Paintsil replaced Saba and Gerlado. It meant Borven took up a position on the right hand side and again showed what a great attitude he has with another hard working performance.

Konyaspor started the brighter of the two sides and both Cikaleshi and Milosevic tried their luck from distance but both efforts wend wide in the opening stages. Korcan also made a good save to keep the scores level after 10 minutes.

It took 26 minutes for Ankaragucu to register their first shot on goal after nice play from Endri and Paintsil but the later saw his curling effort easily saved by Sehic.

Petr Skubic had a good chance at the back post after a good ball from the impressive Jevtovic but he hit the side netting at full stretch.

Just before half time Ankaragucu had a great chance to take the lead. Brilliant skill from Alper Potuk down the left side before a nice ball into Paintsil who in turn put in a great cross for Borven who had an empty goal and tap in but somehow hit the post. An unbelievable miss and chance for Ankaragucu to take the lead.

Ankaragucu started the second half well as Borven went on a good run before setting up Paintsil who shot over the bar. Two minutes later Kitsiou set up Badji in the box but his shot was straight at Sehic.

Alper Potuk was having another good game and all of the good attacking moves involved the former Turkish International. He played a nice ball in for Paintsil but he headed the ball straight at Sehic.

A few minutes later Ankaragucu took the lead, and what a goal it was. Some brilliant build up play involving Kitsiou, Paintsil and Endri with the ball finally finding its way to Pinto who played a lovely 1-2 with Badji, the ball then fell perfectly for Badji who calmly slotted the ball into the back of the net to make it 1-0 Ankaragucu.

Four minutes later Jevtovic shot from 25 yards and the ball came back off the post with Korcan beaten. Ankaragucu got lucky but that only lasted 6 minutes as Shengelia equalised. A nice ball through caught both Pinto and Kulusic out and the Georgian International took a nice touch before firing past  Korcan to make it 1-1.

Ankaragucu went up the other end looking for the winner and Alper had another nice bit of skill on the touchline and beat the keeper but the Konya defence got back to clear.

Konyaspor almost won it at the end but for a great save from Korcan from a Jevtovic header. In the end both teams settled for the point. Two sides on form and we would have settled for that result before the game started. Now Ankaragucu can look forward to an Ankara Derby on Sunday in what will be the biggest game between the two sides in recent history.

Special mention must go to Alper for his Man of the Match performance and Aliou Badji who worked his socks off and got his reward in the end. Bring on Gencler!!!