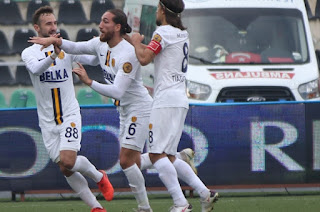 The Football world has woken up to the news today that 12 Clubs including 6 EPL teams, Serie A and Spanish Sides are forming a breakaway league with no relegation or promotion involved. Its basically a League formed for the Elite rich and taking the game further away from the Working class.

The great news is there are no plans for any Turkish clubs being involved in this set up which means we can continues to enjoy the ups and downs and entertainment of the Super Lig.

Ankaragucu will host bottom side Denizlispor on Wednesday in what can only be described as the biggest week in the clubs recent history. On Sunday the team will travel to Yeni Malatyaspor knowing 6 points from those 2 games will almost certainly see Ankaragucu remain in the Turkish top flight.

Despite being bottom of the League, Denizlispor will be difficult opponents. Former Ankaragucu legend Hakan Kutlu resigned from his position as head coach at the weekend after their 3-2 defeat at home against Erzurumspor despite being 2-0 up. Kutlu was also pictured with an Ankaragucu scarf in his office which led to criticism from Denizlispor fans as the two sides would play midweek.

Ali Tandogan was today appointed their new manager and will be hoping to get a reaction from the players as this is the last chance for Denizli to save their Super Lig status. I have watched Denizli a few times this season and they have some good attacking players such as Recep Niyaz, Hugo Rodallega and Angelo Sagal. Former Ankaragucu winger Hadi Sacko is also likely to start for them on Wednesday. They do however struggle to keep clean sheets and are on a run of only 1 win in their last 8 games which was against Yeni Malatyaspor.

Ankaragucu are likely to be without Torgeir Borven, Aliou Badji, Saba Lobjanidze and Atakan Cankaya through injury but will welcome back Endri Cekici into the team after suspension. Assane Diousse also returns from injury.

The 2-2 draw at Besiktas was a fantastic result for Ankaragucu with the last 30 minutes in particular one of the best performances i have seen in the last 10 years. Everyone played their part but Stelios Kitsiou in particular deserves special mention for his man of the match performance.

Joseph Paintsil scored 2 important penalties against Besiktas but it was his skill and pace that won both of them that was most impressive. Paintsil has the ability to be even better if he keeps his discipline in check and stops being selfish at times.

No doubt Hikmet Karaman will have the team fired up and organised for Wednesdays match. The team are nearly over the line and the 3 points will send them a step closer to safety.