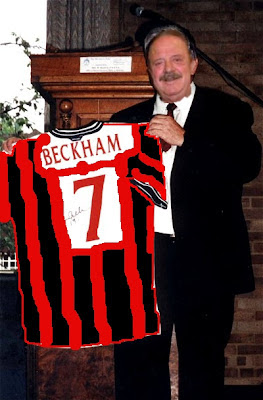 The Turkish Daily News is not my normal source for football stories in Turkey. First up it is a day late due to the fact that it is printed at around about 6 pm in the evening and therefore can't be as quick as we are here (when we aren't too drunk to actually report).

Secondly, like all Turkish newspapers, it doesn't give a damn about any of the non-Istanbul teams. That wasn't always the case. Until a few years ago a fellow by the name of Keith Dearn, who due to entanglements with the then owner of the paper resigned but crept back onto the sports pages using the name of Michael Severn, did a pretty good job in trying to explain the goings on at other clubs.

Keith died of a heart attack a couple of years ago and as far as I can see there hasn't been a decent article on a non-Istanbul team since.

I'm certainly not going to blame the until very recently sports editor of the paper, Udo Steven Bassey, or Udo Okan Bassey as (I think) he calls himself since taking out Turkish citizenship last year. Udo was used and abused by the TDN for years. Not only was he solely responsible for producing the sports pages but he had to fill all of the foreign news pages as well. The poor fellow never received the wage he deserved.

Udo, however, was and is a Galatasaray fan. Therefore he is evil. As a side note, Udo has just moved to a new English-language paper just started up in the last couple of days called "Today's Zaman" where he appears to be doing the same job he did at the TDN. I hope he is getting better paid.

I went to the launch of the paper in Ankara on Monday night to find a very unjournalistic atmosphere. IE: no free alcohol. I should have known that a paper owned by Fethullah Gülen, launched by Prime Minister Recep Tayyip Erdogan and attended by hundreds of his flunkies (of whom about 0.01 percent were women) wouldn't have speeches in English but surely at the launch of an English-language paper they might have had some free alcohol? Or is that the other way around.

My point was that in today's TDN (Wednesday's actually) there was an excellent story which I may have missed in the Turkish papers because normally my eyes glaze over in boredom when I see any story about the Istanbul teams.

The story, The recipe to the perfect transfer story, by Ozgur Korkmaz takes a while to get into but once you get about half way through you realise just how much credibility transfer stories in Turkey have... none.

Unfortunately the online version which I linked to above doesn't have all the photographs as the print edition. Basically though, a reporter for a newspaper (unfortunately not named - for God's sake TDN if Turkish papers are lieing, cheating, being idiots or even telling the truth... name them. How the bloody hell are we supposed to know who to trust and who not to if you are too scared to lay the blame. We name papers here who have stuffed up. Time you lot did too).

Okay the TDN story is bit long-winded but it is the photographic evidence that is great. One shot shows Herman Crespo signing a magazine for a fan, the other shows Crespo signing a Fenerbahce top for a Turkish reporter. Guess which one was Photoshopped?

If only the transfer of Risp and Ayman from Genclerbirligi to Trabzonspor were just photoshopped.

In the meantime though, well done Ozgur Korkmaz, a nice piece of work.
By Oz Kanka - January 18, 2007